In the future, everyone might live in communal buildings. If you’ve ever lived in a tiny apartment in a big city, you know these can have their drawbacks. This film shows some of those potential problems in the form of a drama. It all looks great but it somehow lost me in its fragmented plot. 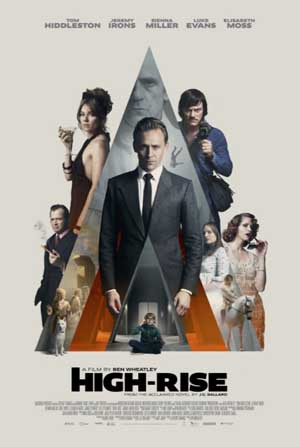 Did you “get” this film? Imagine you live, work, swim, workout, shop, and recreate in a London high-rise building. That’s what’s going on here. The cover almost looks like the game “Clue” since it has all the characters posed sardonically as if to say “I could have done it, but I didn’t.” But this isn’t a “whodunnit.” Instead, it’s a drama about things that go on in said high rise. One facet that’s really weird and alluring is the way the futuristic stuff is all retro 70’s looking. It’s like a trip into a sort of “James Bond” land on a movie studio theme park tour. I also reminded me of Ray Bradbury’s writing. He wrote in the 50’s about a future he imagined from 50’s stuff (phones, analog computers, telescreens, monorails). What’s different here is you have a move made in 2016 that portrays a future using 70’s stuff. It really needs to be seen to be understood. I call it futuristic retro.

Tom Hiddleston plays the main character, Laing. He is the protagonist in the real life novel of the same name by J.G. Ballard. I would assume the novel provided some of the retro visual motivation. The film was directed by Bean Wheatley who is known for Kill List and Sight Seers. He is joined by his wife as screenplay writer on this film once again. Jeremy Irons plays “the architect.” He represents the older gentleman who knows everything about the building. Sienna Miller also stars in the film.

High-Rise is a story about surviving and thriving in a futuristic high-rise. It’s as much about human technology as it is about its failures. Were people meant to live this closely together? One might decide not after watching this film. Then again, it could be the fault of a few bad applies that spoils it for everyone. When Laing first moves in to the building, I asked myself “Why would he ever need to leave?” There is even a floor that serves as a grocery store. On its face it seems a novel idea, but perhaps we do need to go out from time to time and mingle?

Luke Evans (known for Dracula) plays a scary Wilder. He is the antagonist and the constant fly in the ointment. At the same time, he was the character I enjoyed watching the most. He bares a similar resemblance to Michael Shannon, who has a similar demeanor as well. It’s impossible to rule out whether a certain person or the faulty plans of the architect pave the way for anarchy in this London high-rise. despite the contained setting, there is sex, violence, vengeance, and science fiction that keeps the plot interesting. By the way, does anyone agree the sex scene was way too long? Is Tom Hiddleston gunning for a new genre here? Unfortunately, the structure and slick look is fragmented. I don’t think I “got it” as I was supposed to.

Lots of time movies look really slick but I just can’t get into them. It happened with the remake of The Man Called Uncle and some others I reviewed last year. I could probably go back and understand this film better a second time but I probably won’t anytime soon. For the visuals and futuristic/retro ideas, I gave it a 3/5. This is one however that I think will depend a lot on the individual as to whether it’s “gotten” or not. Part of being a “spoilers” reviewer as I am these days is being honest about my gut response. On a gut level, this movie scores lower with me. I try to avoid rating film by my gut so for the look, acting, and structure, I give it 3/5.