Anticipation was high for my wife and I going in to see this film. After about 20 minutes, it wore off. After 40 minutes, we had very little idea what was going on. When there was a bout 20 minutes left to the end, we walked out.

The film started in sort of a cool way. It was the type of sci fi beginning that brings you up to speed. At some point in the movie however my wife and I just lost all hope of having an interest and we walked out. Please know that we rarely walk out of movies. In over 13 years of marriage and seeing films, we’ve done it 2-3 times I think. You may know that feeling when you realize it just can’t improve.

The Basic story is that 20 years have passed since aliens nearly destroyed the Earth in the first film Independence Day. The Earth has had a lot of time to build up its defenses but will it be enough when the aliens do return in Independence Day 2.

It’s not meant to be a funny or nonsense movie but I have a feeling comedians and critics will be pulling funny material for routines and columns for decades. Take a few of these particulars for example: Liam Hemsworth’s character pees on a dead alien, there is an alien prison at Area 51, Bill Pullman goes (in a matter of an hour) from a lock down mental health facility to giving national military advice, and the queen alien is supposed to be as big as half the Atlantic ocean. Let me remind you of what I listed in the writers section: there were 6 professional writers for this film. Process that for a minute … 6. When I research most my reviews there is 1 writer, 3 tops. 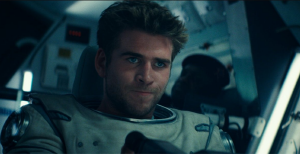 Speaking of time spent on reviews, there are a slough of reviews out there on this movie that have done a lot more homework than I. I had high hopes for this film since my wife is a fan of the first one and we wanted to see what happened in the sequel. What we got instead was a convoluted mess that barely made sense and first and whirled out of control quickly to where neither of us knew what was happening.

Could it be the director was hoping for the pro-war, pro-military crowd to dance a jog just for the sake of kicking alien ass? I apologize if that offends anyone but I am really grasping in the dark to find a motive for making this film. I haven’t said this in a review for a while, I do not recommend this film to you. The end leaves room for a sequel so perhaps they’ll produce something better next time. Too bad they missed the mark with this one.