Watching “The Congressman” I was taken back by the video images of a sleepy Maine fishing town and impressed by the acting skills of Treat Williams.

There is care given to capture sunsets, active fishing expeditions, and more. There is one sunset that is unforgettable.

This film is about a Congressman named Charlie Winship, played by Treat Williams who is known for Hair and Deep Rising, among many other television and film roles. Charlie has a bad day when he is captured on iphone video sitting wile the rest of Congress is doing the pledge of allegiance. In our viral world, it gets publicizes fast and Charlie gets a lot of judgement for what he did. It gets a lot worse before it gets better and the idea presented is that we tend to worship rituals instead of concepts of freedom. 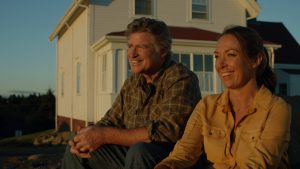 Charlie retreats to an island off the coast of Maine and while there he recovers the small town values that once made up his political his platform. He connects with a woman, Rae Blanchard, played by Elizabeth Marvel. She is very important in his return to his previous morals about Freedom. The film moves around rather quickly with not too much time on any one person. It focuses a spotlight on an issue and then moves on leaving the viewer to form her/his own opinions. 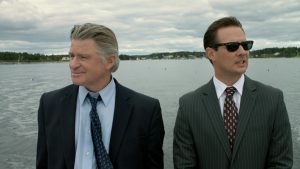 This may be seen by some as a “light hearted” film that doesn’t make any grand stadium statements. The other reason to see this film is Treat Williams’ performance. He speaks with such seasoned ease in acting. He delivers his line as though he were an actual congressman. It’s a great film to watch and internalize at the theater or on Video On Demand where you can find it now. For the reasons stated above, I hope many get to see and enjoy this film.