This film is guilty of a convention lately where a movie is labeled horror and there is miniscule backing to call it as such. It is a bit of a thriller as labeled but more a drama as it is not labeled … oh so much more of a drama. 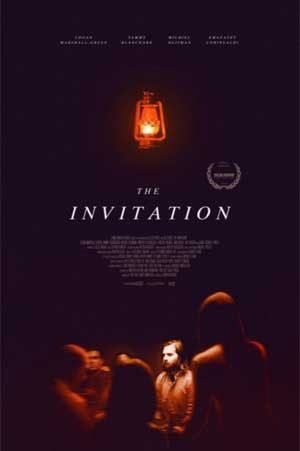 So here’s what the Invitation is all about. I know a lot of you have probably been seeing it advertised and you’ve thought to yourself, “I wonder what that dark, foreboding looking film is about? I need to see it someday.” That’s what I had been doing that is, until today when I finally watched it. There were no pleasant unraveling, except for the performance of Logan Marshall-Green who plays Will. Let’s talk about that first.

Will is a re-married guy who lost his young son while married previously. He didn’t see the first wife for 2 years after, nor did he see any of their good friends. After that 2 years, he gets an invitation to attend a dinner party at the house where his son was killed and he reluctantly accepts. The drama begins there (no horror, sorry to disappoint). In all truth, there is nothing really scary at all in this film, much less horror. Why it is classified as such, I do not know.

Basically, the ex-wife and her new husband have plans to kill the 11-15 people at the dinner party because they got through their pain by being in a cult. There is some suspense as we try an figure out why the vibe is so weird. When the gun comes out, we all know what we suspected was correct. I was a little bitter that I waited over an hour to find out this was a dinner party poisoning. There are attempts to escape and Will and his wife are among the survivors. That’s it! No shocking horror moments that take you out of your comfort zone. There is nothing here you haven’t seen before. This film could have been half as long.

The story is weak, as is the premise. One example of something that is never developed is the divorce and subsequent remarriages. Will seems perfectly comfortable with the new husband, who incidentally is the leader orchestrating the killing. The film is better classified as a drama but it’s a highly underdeveloped drama. I rate films based on what they are trying to be. There is no horror here and very little suspense so it loses 2 stars for that. Finally, the script is very weak and drags on. For that, it loses another star. If you ever see this film clicking through possible horror or thriller titles, opt for an independent true horror/thriller like Hush instead.