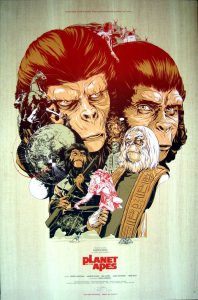 Writing this review now in 2016, I was shocked to find this film had a G rating. As a kid growing up 0-10 in the 70’s, I remember certain images from this film that used to creep me out. Plus, it’s so rare that you find a G rated sci fi nowadays. I didn’t understand it in those years but when I hit my twenties, this was one of those films my scooter buddies and I would rent along with other classics like The Godfather and Blade Runner to just trip out on and talk about. It’s of course a timeless classic now and there has been a resurgence of the franchise with a whole new set of CGI movies that are surprisingly good in a different way.

The concept of the franchise is pretty simple: Apes have evolved above man and use him as their slave. In the 60’s the evolution arguments were rampant of church and university grounds so this fit right in with that. Actually seeing these apes likely had a polarizing impact on the religious folk who saw man as greater tha ape. At the same time, I think it infused strength to the 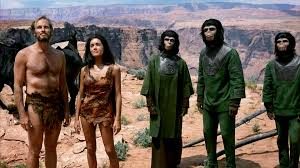 argument that man was just another animal and we shouldn’t rule over animals in the sometimes harmful ways that we do. BUt that is just the “ape level.” There is much here about science and faith. In the original film, there is talk of “scrolls” and “heresy” by the humans and apes who help them. f you know Christian subculture or have observed it, these references are accurate and quite funny.

I love the prosthetic masks in the movie. They look camp at first but you really get used to them after a while because the costumes and backgrounds are so masterfully crafted. It reminds me of a Twilight Zone episode for good reason: Rod Serling, creator of the Twilight Zone, co-wrote the screenplay. This movie is something to look at. Most the outdoor footage was filmed at Lake Powell. It resembles Mars or some other uninhabited planet. In this film, a crew was sent into the future but something went wrong. As a result, they have to try to survive and escape from a civilization of apes that speak and are much like intelligent humans.

While there among the apes, they see the effects of man’s greed and imperfections. The apes have an opportunity to see themselves as well but they are not as interested. There is a bit of a “not-friendly” history in the scrolls and therefore humans are not to be listened to.

Charlton Heston plays the lead human, George Taylor, and he is so much fun to watch. He has interaction with a slave who cannot speak and there is some chemistry there but hardly enough to call the story a romance, as IMDB does. Roddy McDowell plays Cornelius, the scientist ape that buys in to the intelligence of humans. His partner Zira, played by Kim Hunter, is devoted to humans as much as she can be in her society. It was sort of like a Jane Goodall and the chimps kind of thing. At the end Taylor asks her for a kiss and she says shyly, “But you’re so ugly.” That is a fun scene because it’s an opposite scene. If you recall the Twilight Zone episode when the woman is in face bandages the whole episode and at the end you find out they are trying to make her ugly, she is actually beautiful. It is in the eye of the beholder. Serling loves taking structures apart and letting the audience put them back together, or not. Planet of the apes is one of the most classic examples of his style in doing that. We may not question our own systems but if we see an ape and an actor talking, maybe we cab deconstruct theirs and return smarter, changed for the better. Most of all, this movie is for the open-minded or those who are open to becoming more open-minded. *raises hand*

Speaking of being open-minded, the stunts in this film are about as real as an outdoor rodeo during the clown show. When Taylor gets sprayed with a firehose, you see every sinew in his neck flexed. I love his over acting. The movie is meant to be serious sci-fi but watching some of these stunts makes you think of the comedy of later decades like Airplane or Scary Movie. Other props and effect in the film are almost comical in their representation of seriousness. There is a cadaver in the space pod that looks just like Norman Bates’ dear fake looking mummified mother in Psycho. My point is not to jeer or belittle these poor effects but rather to praise a film that evokes such a powerful response from so many people worldwide in spite of these simple stunts and props. Once again it is proof that directors don’t need a palette of CGI to make a film popular with audiences. This film evokes a response and takes itself seriously. If you have a good story, this film proves that is just about all you need to make a hit. 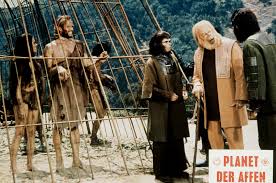 In conclusion, I had a lot of fun going to see this film recently in the theaters through Fathom events’ TCM series. I was just as entertained as I have been with any recent films I really liked. I know almost every director out there has seen this film but I hope they can start to follow its movie making wisdom more closely. We need less CGI (done badly, I don’t mind it when it’s done well) and more good story surrounded by people with passion and the desire to evoke an audience response.