This film was written and directed by Andrew Renzi who is a relative newcomer. Unfortunately we see the same sort of “bare all” ugly reality side Richard Gere gave us in Time out of Mind, and it doesn’t work as well. 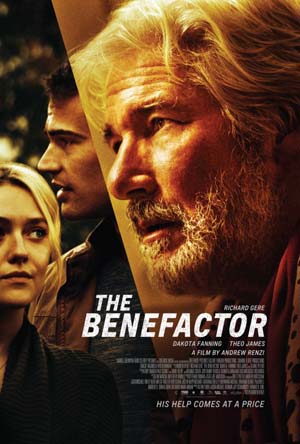 The more you know about addiction the more you know the difference between a schedule I drug and a schedule V. No addict is groping for a fix of a schedule V drug, although some kids these days are mixing them to get high. Richard Gere is showing us addiction in a very in-your-face way. He seems to be creating these roles for himself at his current age which I believe is around 60. Time Out of Mind is where I saw it recently. He is bare-boned and raw in that one suffering the effects of homelessness and early-onset Alzheimers. You can see his pain in that film, in fact, you fan smell it, even feel it as your own. It’s uncomfortable in that film as it is in The Benefactor. I’m fairly certain Mr. Gere is trying to show he’s a great actor by baring his yellow teeth, so to speak. In other words, he’s not holding back in his portrayal of character these days and he wants you to come along on the journey with him.

The Benefactor isn’t just about addiction but rather the personality flaws and types that make people become addicted. We can say to ourselves, “He’s an addict by choice, that would never happen to me.” We say it every day about the disheveled brutish person begging for a dollar in front of Starbucks. We say it about our friend’s teen who just entered rehab. We judge and prejudge and post-judge and become disgusted when we hear about the lengths addicts go to in order to obtain a fix. This film looks at one man and who he is in a singular way. In the beginning you could argue we are meant to hate him. Middle and end,  one could argue the same.

He’s the head of a hospital, a pushy benefactor to an unwitting twenty something Olivia, played by Dakota Fanning of many movies you can look up if you don’t already know her. He is also a general piece of shit to her fiancee, Luke, played by Theo James known for the Divergence series. Let’s visit a tiny bit of plot to see why he acts this way: Franny (Gere) was in a terrible car accident with Mia (Cheryl Hines) and Bobby (Dylan Baker) and Mia and Bobby were killed. Franny was like an uncle to Olivia and after recovering from the accident and becoming addicted to pain pills, he extends financial help and a space in his mansion-like home for Olivia and Luke to live. The trouble is, his money has strings attached and he needs a lot of attention.

We see Franny go through withdrawals from Morphine and through many embarrassing situations where he begs for drugs from many people in the movie, including Olivia and Luke, who by the way is an oncologist doctor. Watching the film is uncomfortable to say the least. As I noted earlier in my review, Gere seems bent on showing every ugly (real?) side to the audience these days. It may be there is no better side. Whatever the reason, this film is the second in a series of films where he chooses to be ugly and in-your-face. It’s telling in fact after the final generic title flash which indicates the end that we see flashes of Gere shaving his scraggly, overgrown white beard with a razor. I actually stopped watching there because I was so on edge with what he would do to himself throughout the movie, I thought he might cut himself on purpose just to show us his true blood.

This is an ok story but a strange convoluted script. Gere is meant to be hated and he is. I had no compassion for him in the little pharmacy desperate to get a refill. He screams, he cuts himself, he says mean hurtful things to olivia and her fiancee, it’s not a happy go lucky movie like Pretty Woman that’s for darned sure. He’s moved way beyond that as an artist and I think he wants you to know it. If he could have developed the other characters a bit more it might have been better. We never get the backstory on what Olivia has been doing as he was healing. Well, she’s pregnant so we know one thing she was doing. Movies with a hate-able protagonist work better when you get other perspectives. As it is, the whole movie is a camera right up Gere’s nose. That detracts from the story.

Another problem is the script given to Gere. I don’t “buy it” when he’s trying to be tender with a kid in the cancer wing, hiding under the blanket and playing good doctor. I don’t buy it when he’s trying to be sweet with Olivia. He doesn’t strike me as an uncle or even a friend. For her to move in with him, risking her marriage and her pregnancy, it would need to be a safer place. It feels tense from the beginning. Another odd non-sequitur is the fact that Luke just up and moves in with Franny because Olivia wants to. If Luke is a doctor, couldn’t they afford their own place? Finally, by the end of the film, we hate Franny almost to the point where we want him to disappear. Yes, he’s that annoying. Still, when he wakes up, the orderly nurse escorts him to the maternity ward to see Luke and Olivia’s child? What? Based on the story I sat through for 1hr 30mins, that would not be appropriate at all. I kept expecting it to all be a dream and he’d wake up in rehab. Unfortunately, you’ll find an alternate to my expectation. There isn’t anything smart here. I think if you really love Richard Gere in movies, you may have a reason to go. You’re gonna see everything about him at 60, well, not everything. Hopefully that won’t get back to him and give him any ideas.