We think about slavery as being the time when prejudice was at its worst, and then with the Civil War it ended. Often we forget it continued long after and if you want to be truthful, it still goes on today. I am so pleased to see so many films this year portraying a realistic image of prejudice and how much it is still dividing our country. “Mudbound,” that is incidentally up for Best Picture, is a historical piece that takes place after WWII. It stands as a graphic reminder of the prejudice that remained at that time. 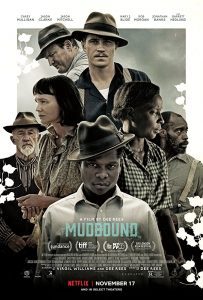 In this film we have 2 stories running parallel. One is the story of a while serviceman flying bombers in Germany. The other is an African-American fighting for the USA as well. They come back home to the farms of their youths. The white has become a drunk and the black has encountered racism which surprises him since his return.

Old prejudices die hard, especially when the Klan is near. There are touching moments where the blacks start to trust whites and whites start to lift their prejudices. The issue of mixed race comes into it and forms a motive in the film. I don’t know how racists would view this film but to me it was utterly horrifying, as it always is when I see extreme racism on the screen. This one is not for kids. It is a good example of how horrible whites have treated blacks through history, even the ones who have returned from war. The struggle for true equality continues, lest we forget. I gave this film a 9/10.