“Pull my neck back, I’ll pull yours.” -relatives posing for a photo

Sequels are rarely good and this one isn’t good at all. Written by comic, Nia Vardalos, it shows a definite need for a writing partner or team. It’s a redo of the gags from the first movie with no real “new” message for the audience. I was shocked to see this film was produced by Tom Hanks. I suppose he thought it would make him money based on the first film in the franchise. I wonder if he visited the set and offerred his advice to the director. 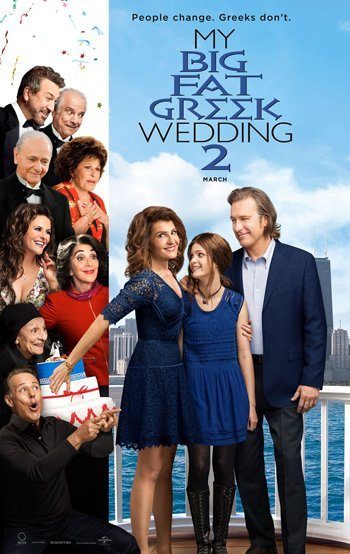 Directed by
Kirk Jones
Written by
Nia Vardalos
Other Info

The best part of a good date movie is one that makes your wife or girlfriend laugh. There is nothing more satisfying on a movie date than hearing her laugh out loud. There were just a few ties in this film I heard my wife laugh: so there you go. In the first movie, the Greek father showed how Windex was a cure for everything but even Windex can’t save this long movie.

It’s about another wedding but this time it’s her parents. They find out the wedding was never fully sealed since the priest was not fully ordained, or something like that. There are a lot of significant particulars in this movie that I just didn’t care about. The script goes all over the place and when it seems it’s too far afield, they just crack a joke from the first move assuming that will save the scene. It doesn’t.

I never walk out on a movie but when the old mother and father were planning their wedding it really was like fingernails scratching down a chalkboard: irritating. There were a few gags here and there that worked but overall it was a mediocre comedy moving at a snails pace. The angle of having the parents remarry could have been expanded thus making the movie better. Unfortunately the directors were content to show that Greek women do best married with children. It’s also shown that Greek men rely on their wives for too much and nothing really changes even now in modern times. There were a few laughs and it was a light-hearted movie. That only took me as far as to give it 2 stars though. I wouldn’t recommend this film unless you are just in love with the actors. It lacks the charm of the first film in the franchise.