Most Gen-Xers know the attitude John Lennon of the Beatles had and the impression that left on modern culture. Milennials may not know much about him and they more than anyone should see this film. Beyond that, Boomers and everyone left living will love this film that chronicles the “pre-Beatle” years of John Lennon. It’s highly well made and the material is timeless. 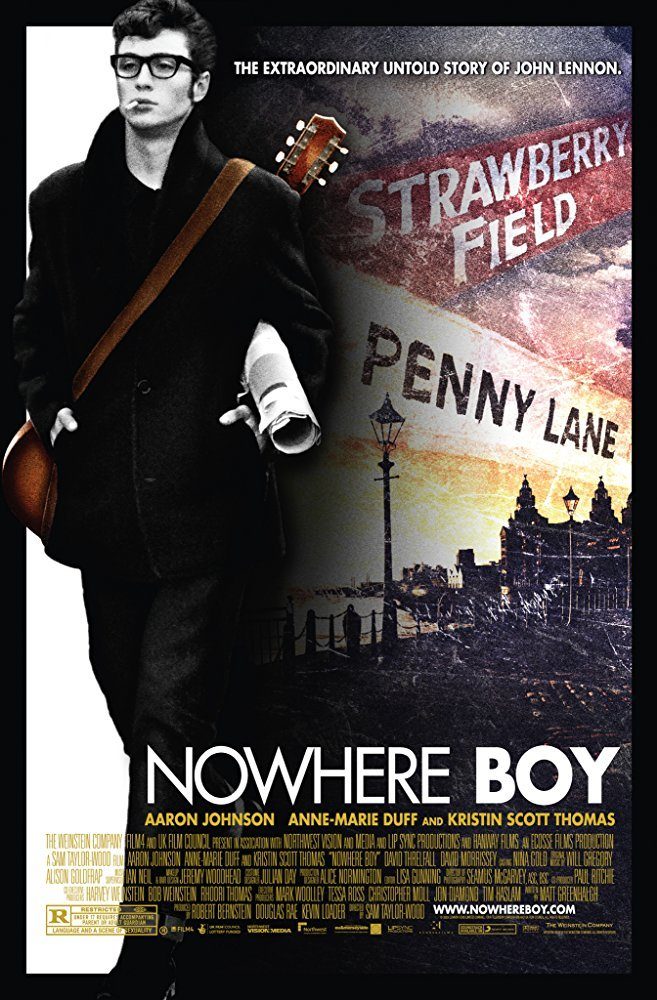 A chronicle of John Lennon’s first years, focused mainly in his adolescence and his relationship with his stern aunt Mimi, who raised him, and his absentee mother Julia, who re-entered his life at a crucial moment in his young life.
Director: Sam Taylor-Johnson (as Sam Taylor-Wood)
Writer: Matt Greenhalgh (screenplay)
Stars: Aaron Taylor-Johnson, Kristin Scott Thomas, Anne-Marie Duff

Sam Taylor-Johnson is our director here. She is unfortunately the director also of “Fifty Shades of Grey.” We’ll give her a hat tip anyway for taking a bestselling novel and setting it to film. Although I haven’t seen it, I’m sure it isn’t all bad. Her other directorial stuff has included a musical short by R.E.M. and some other huge acts like The Weeknd. She wins big with me on that, I’m a huge music lover. As a trivia note: Director Sam Taylor-Wood married Aaron Taylor-Johnson, the actor playing John in this film.

This film is different from your average biopic. First of all it’s an adaptation of a novel on the same name. Also, it’s the story apart from the luster of the Beatles. We get this guy named John instead of the notorious Lennon. He doesn’t even look like him. That may be a plus because this story takes of out of the Beatlemania and into the psychology of a young man in England trying to fit in as a square peg. I had some issues with the film in it’s ack of rational realism. How could he have learned guitar so fast? When did he start to write songs and how did he hone them? Stuff like this is missing because it’s focused more of relationships.

He is raised by his aunt who is very strict but clearly loves him. As a late teen, his real mother re-enters his life and tells him all about rock and roll. In fact, it is she who teaches him to play music on the banjo. He starts a rock band and goes through a few key life-changing experiences that one might assume made for the attitude he brought to the Beatles. This is an excellent film I highly enjoyed watching. I wish there were more like it about the other members of the Beatles. I give this one a 9/10.