This kind of humor hits fast and hard with some people, for others it has to grow on them a bit. Regardless, for my “folding money” this is some of the funniest stuff in film. I’ve seen this film probably 10 times and it just gets funnier every time I see it. A mix of early Americana and the Odyssey by Homer makes for this hilarious film of crime, salvation, old country/folk music, and comedy. 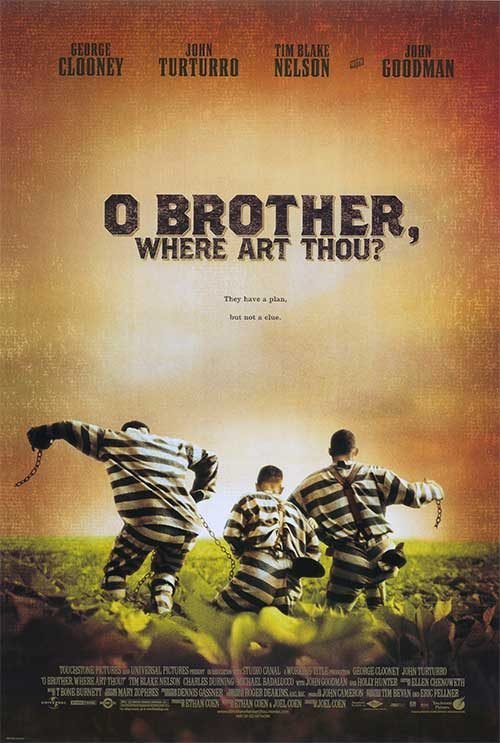 I wasn’t really a Clooney fan until I saw this film. He has a recurring line he says that always cracks me up, “We’re in a tight spot.” The fact of the matter is, they are quite often in a tight spot. The cat and mouse chases are most of what makes this film a laugh a minute.

In an allegory to Homer’s Odyssey, some men escape from prison to go on the road. They make their way through recording on the radio, meeting interesting people, escaping close calls with the Ku Klux Klan, and a few other scenes you have to see to truly “get.”

John Goodman reminds them “it’s all about the money” and beats them all with a stick. That’s a funny scene but this film is about a lot more than just money, it has soul. I recommend this film for fans of the Cohen Brothers’ films and those into bluegrass roots and music. Watch it with an open mind since it is not straight ahead comedy. If you can get what it’s doing, you’ll have a good old-time enjoying this country folk crime ride. This film ranks in my top 15 for sure.