Pan’s Labyrinth has more creatures than Star Wars and a historical story that will have you ranting and raving from your seat. Sometimes the scary creatures we fear become our salvation and the humans we trusted become our curse. 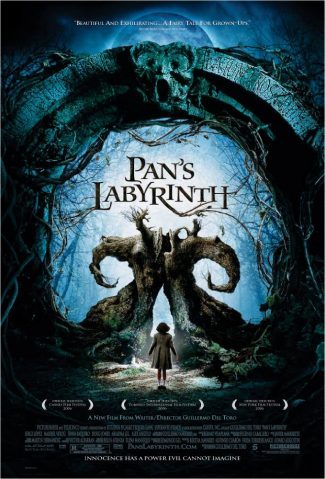 This film is a monster feast for the eyes. Guillermo del Toro takes us into a child’s imagination of horror and art. It’s been called by the director the “sister” film of The Devil’s Backbone. Both are about children in the ghost world and both take place in the Spanish Civil War. It differs in how there are faeries and fauns instead of ghosts. This might make it a fairy tale. No, it’s much more than that. This film may be dark in hue but it shines as a spectacle accomplishment of cinematic art.

Like Backbone, this is more a drama than a horror film. There are more scary moments here than in the other but it is meant to create a sense of another world:

“In 1944 falangist Spain, a girl, fascinated with fairy-tales, is sent along with her pregnant mother to live with her new stepfather, a ruthless captain of the Spanish army. During the night, she meets a fairy who takes her to an old faun in the center of the labyrinth. He tells her she’s a princess, but must prove her royalty by surviving three gruesome tasks. If she fails, she will never prove herself to be the the true princess and will never see her real father, the king, again.” -IMDB
Her real father is the real horror here. She goes to the labyrinth to escape him and reality. We see 2 competing worlds throughout the film. She must learn to not be afraid and to make a new paradign shift to understand where the dead stand in regards to the living. When you fear your mortal surroundings, animal and insect company seems preferable.

This adorable young girl somehow survives the hateful acts of “The Captain,” her stepfather. She is a hero for this. I felt it was saying when war is all around one, that one might lose her/himself in a hobby or discipline. Could it be that our protagonist has such a strong imagination that she sees the faun with other lovely, haunting creatures? This is just one interpretation of this film. It’s an entrancing film and I recommend it to all who read my blog. A classic for sure.

Riley on Film grade: A