Some people who love modern horror may scoff at a film made in 1960, they may think it couldn’t be scary. This film has a reputation among critics as being scary but does it have the scares to justify that? 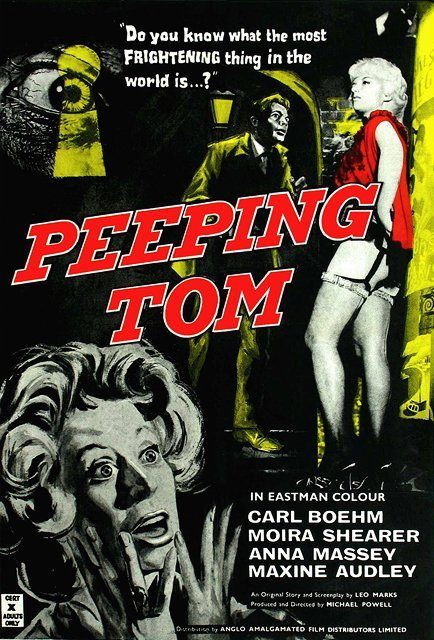 Michael Powell is a director’s director. We are talking about a man who in 1960 had directed nearly 60 films. He is truly a talent that students in film school should study. Directors like this know their craft and leave nothing to chance. What you see on the screen is what they want you to see, period.

The actors know their stuff as well. Karlheinz Böhm plays the lead and he is a frightening individual. He captures women luring them in with the promise of taking their portraits and while getting close up he stabs them in the neck. The women are attractive and scantily dressed which is nice. Hey, it’s the 60’s and this is horror right?

This film weaves a creepiness throughout. The killer is brutal but quite subdued. You watch him with the curiosity of one who might watch Hannibal Lecter. He is a psychopath who gets off filming women as he kills them. way he uses his tripod as a stilleto blade is cool. I must admit it did seem slow at times but I figure that’s because horror has sped up through the years.

FINAL THOUGHTS
This is 1960’s horror at it’s best. It’s like watching a technicolor version of dragnet but the villain is having his way with many women and killing them. Some old movies are boring, not this one. I recommend it to anyone who likes classic films and especially classic horror the likes of Alfred Hitchcock.