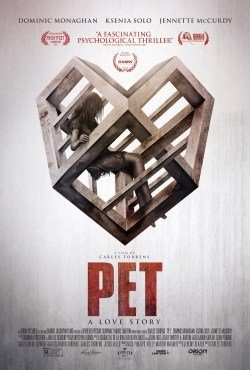 Pet isn’t the best thriller of 2016. I’ll venture to say 10 Cloverfield Lane is that. But it has its moments and if nothing else, you wonder what such a stupid psycho killer will do next. Since this film is still quite new, I won’t engage in spoiling the twist. Suffice it to say, I saw it coming. The film does raise the interesting and creepy question as to whether you or I could handle this sort of entrapment and confinement. What lengths would we go to to be set free?

Dominic Monaghan (Lost) plays the “touched” psychopath well. He’s an animal control officer by day which is rather fitting since he’s a killer in his off hours as well. But this movie isn’t about killing so much, it’s about confining someone, holding them against their will. If you’re like me, that’s a quite uncomfortable notion. This film definitely makes you feel discomfort all throughout. Is the end satisfying or mundane and noncreative? You be the judge and then let me know in the comments.

FINAL THOUGHTS
In the final analysis, this is not an amazing piece of craftmanship. We see a lot of tired conventions seen in prior thrillers. You might be tempted to yell at the screen to help avoid a few times but it probably won’t work. Despite the weak script and tired conventions, the raw fear of being detained against your will is what makes this film worth watching. That is such a scary prospect for most people, I think the film would work regardless of any flaws. The question is: does it work in an amazing way I feel like writing more that 355 words about? No. I recommend it for a light hearted scare/thrill.