After seeing Alice Lowe as the love interest in “Sightseers” I will recognize her in anything she does I think. She a unique look, beautiful and yet just on edge. You’re left wondering what she will do in every situation. That is very true in “Prevenge” only most would never guess what she’s planning next in this film. 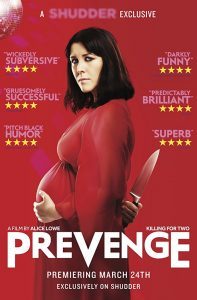 Widow Ruth is seven months pregnant when, believing herself to be guided by her unborn baby, she embarks on a homicidal rampage, dispatching anyone who stands in her way.
Director: Alice Lowe
Writer: Alice Lowe
Stars: Alice Lowe, Dan Renton Skinner, Jo Hartley

Alice Lowe gives us a triple blow here: She is director, writer, and leading lady. This undertaking always impresses me. Sometimes, the quality of the film suffers but in this case it doesn’t. This reminds me of some crazy idea she had maybe in a restaurant some night out after a lot of beverages. The difference between this and most ideas directors have is that she saw it through. The idea for a horror movie is a novel one and it follows a specific rhythm. It is comedy, but black comedy at that. Not everyone will find this funny. Fans of horror surely will. I give this one a 9/10.