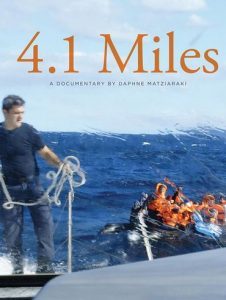 The Large Association of Movie Blogs (LAMB), run by Jay Cluitt, has been sort of my conduit to blog film criticism and specifically posdcasting. I was on the MOTM episode last weekend and found out I had time to submit an article for ‘Best Documentary Short’ nominees for the Oscars. I was quite happy about that.

I watched all 5 short films and wrote mini reviews. Jay was kind enough to publish my post today on the LAMB.

Below is an excerpt, you can visit the LAMB site to read the whole thing. I found these shorts to be some of the most powerful films I’ve seen ever, even just at 20 minutes or so each. A common theme is “connectedness” of the humans on several levels.

This year’s short film documentary nominees are all excellent, however they aren’t really “feel good” films but they use the documentary short genre to deliver important and powerful information of our time. Recurrent themes like the plight of refugees and the Holocaust abound. This is great news to me because I believe in these causes and movies are a powerful medium to broadcast them. I rate this type of film by how captivating the presentation is, and my how captivating they can be! Since the Oscar should go to the film as an art form, the topic is actually secondary.

Currently streaming on Netflix. This difficult short film takes the viewer into the real ER and hospital beds of the critically ill. Whether it’s cancer or a disabling disorder requiring a breathing tube, we see what doctors and families face every day. I have become increasingly interested in the right to die with dignity movement. This short really makes a great case for consideration. These are real patients filmed in a real hospital setting. The interviews with their families as well as the footage of them being interviewed by doctors are all real. It is almost impossible to watch in a comfortable way but then again, impossible to turn it off.

Also streaming on Netflix. The Syrian conflict is unknown to a lot of Americans. It’s relevant because Obama’s administration gave a lot of aid and assistance to the refugees. I was always a proponent of this because I hated to think people had nowhere to go except into the bombs. This film made me realize I was right to support the Syrian aid. It focuses on a group known as the White Helmets. They are a volunteer Syrian force that assists those in the bombing zones. Like Extremis this is a hard short film to watch. It’s also a great film because you can’t turn away from it, it draws you in. …

Read the rest of my post at the LAMB site.