Ridley Scott has said numerous times that this is decidedly not a prequel to the Alien franchise. I would say that is a somewhat misleading statement. It takes place in the same Alien universe with the same sorts of life forms only other species thereof. This could be considered a prequel that requires another movie to really explain what is going on in the Alien movie itself. Furthermore, there is an alien creature at the end that is a child version of the ones we know so well from the franchise. Listen to my audio review of Prometheus: 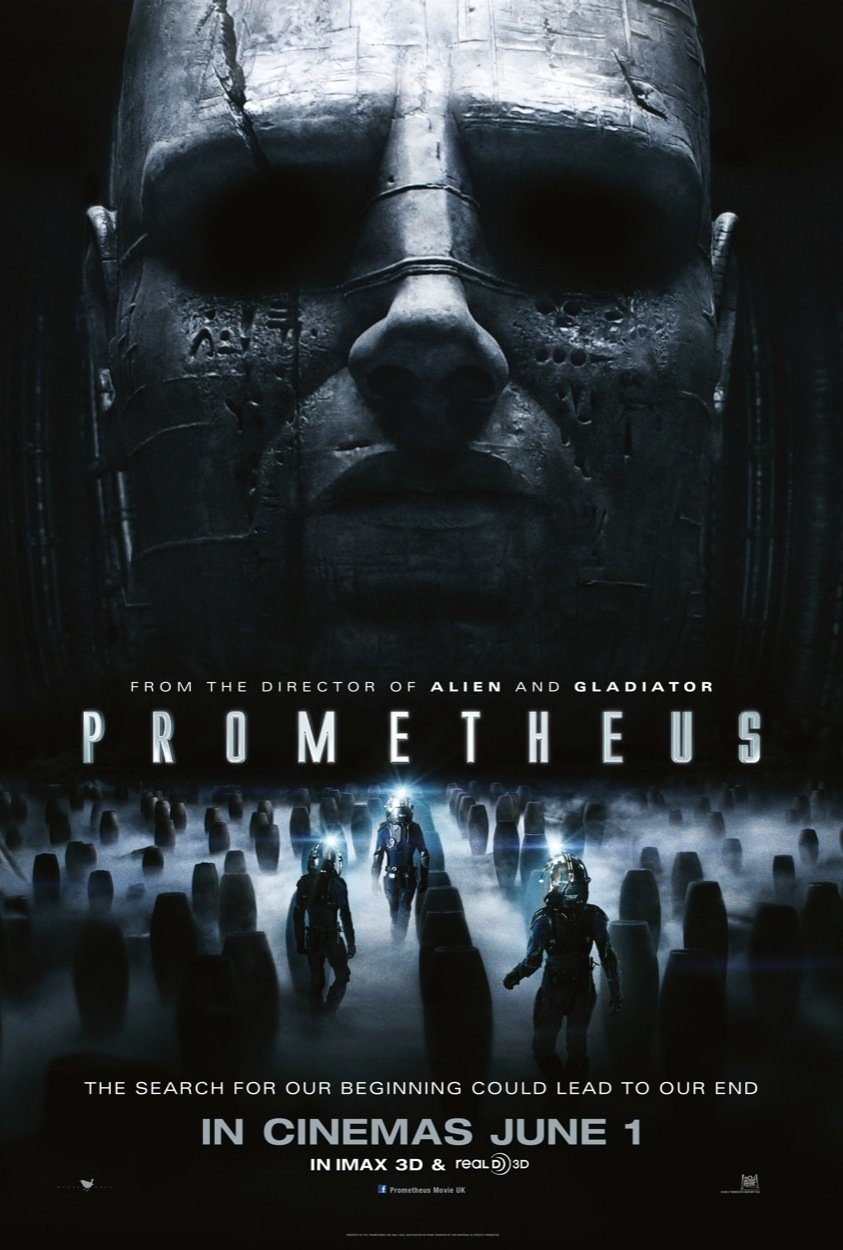 Prometheus takes us back to the time before Ridley Scott’s Alien. It fills in a few gaps for us as fans of the franchise and opens all sorts of curious new doors. It stars a relative newcomer who really packs a punch in her role. The actress who plays the tough and sexy Elizabeth Shaw, Noomi Rapace, is well known for playing Lisbeth Salandeteen The Girl with the Dragon Tattoo series (Swedish version). Other actors with outstanding performances include Logan Marshall-Green, known for Devil, and Michael Fassbender as the android.

The movie starts out slowly though it reveals some truly amazing cinematography of Saturn and other parts of the universe in the story. In the beginning a human-like creature drinks a poisonous mixture and the special effects of his demise pull you in right away. There are, in fact, some really gruesome scenes in this movie. No special effect is spared when actors are taken out, Alien anyone? Still, despite the obvious resuscitation of an old sci-fi hit, Prometheus has a lot of treats all its own not the least of which being the question of how we came to be as a species. This movie says that aliens created us then decided they’d made a mistake, and then made aliens to wipe us out. It’s actually a pretty interesting premise, though it sounds really simplistic now as I write it.

Here’s a summary: The crew of a ship named Prometheus are heading to another planet that has some of the features of Earth and is able to sustain life. When they get there they find cave drawings and dead bodies of ancient creatures that died around 2,000 years prior. One cool piece of trivia is that the cave paintings are derived from and include some of the actual cave paintings from Werner Herzog’s Cave of Forgotten Dreams. In discovering these giant caverns, they set off dormant life that was meant to destroy humanity. This was not the life of their creators but rather created beings to destroy humanity. It is evident that “the engineers” or, those who created humans didn’t really care much about us and in fact decided we were destroying Earth’s environment to we therefore needed taking out.

There is a token android on board along with a bunch of men and women that are almost identical in character to those in the Alien movie. After a lot of gratuitous violence meant to show the aliens truly hate people, Elizabeth Shaw discovers as one of the last living crew members that she must destroy a disembarking ship designed to kill all life on Earth. She manages to destroy it with the self-sacrifice of a few of the remaining crew who die. In the end, Elizabeth takes off with the severed head of an android (?) and sets out to “search” for the engineers. The movie isn’t over before an alien is “birthed” in the usual way. As I said, there are a lot of commonalities between Prometheus and the Alien movies.

Final Thoughts
In the final analysis, Prometheus is a visually stunning, well crafted and well acted movie. It starts slowly but when it picks up it is the ride of ones life. I haven’t seen a sci-fi this exciting and enjoyable since … well, since Alien. All the questions I ever had about Alien were answered here. Well, all except one: will there be a second prequel to catch us up to the beloved sci-fi horror film we know and love so much?