When dealing with a monster novel series set to film, there is always the challenge of meeting high expectation of the book fans. I don’t know about that but I can say I had a great time watching this adventure/fantasy/action film. It had great actors, a more than functional plot, a villain and a satisfying conclusion: just the kind of Summer film I’ve been looking for! 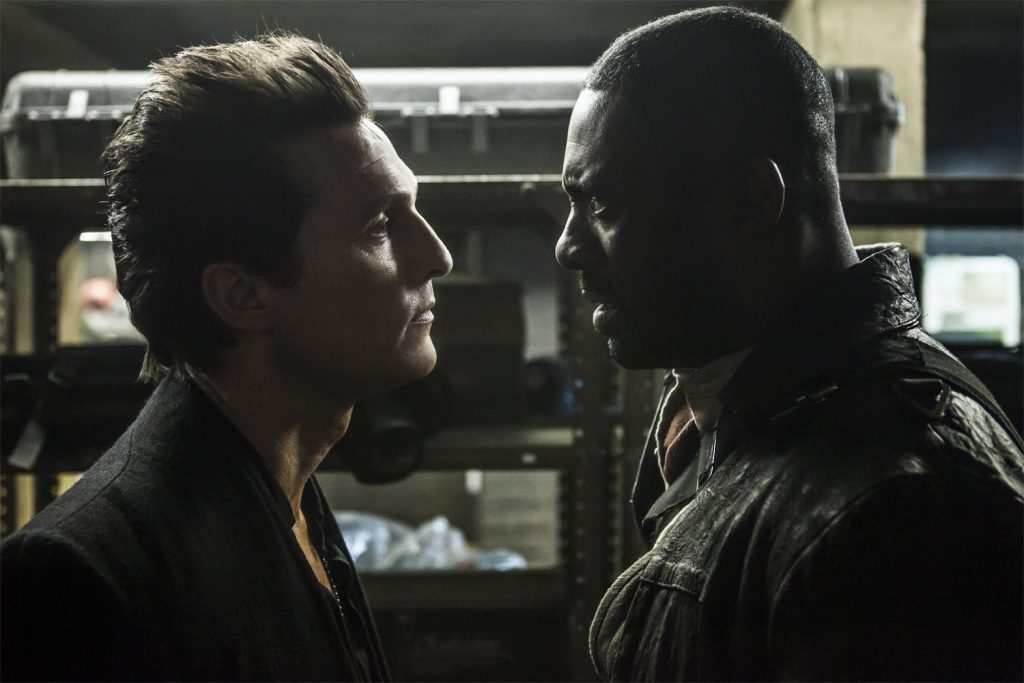 The last Gunslinger, Roland Deschain, has been locked in an eternal battle with Walter O’Dim, also known as the Man in Black, determined to prevent him from toppling the Dark Tower, which holds the universe together. With the fate of the worlds at stake, good and evil will collide in the ultimate battle as only Roland can defend the Tower from the Man in Black
Director: Nikolaj Arcel
Writers: Akiva Goldsman (screenplay), Jeff Pinkner (screenplay) | 3 more credits »
Stars: Idris Elba, Matthew McConaughey, Tom Taylor

Nikolaj Arcel directed this film, he is known for A Royal Affair and Truth About Men. He has also been a writer on many films and tv shows such as Millennium. In the IMDB media section, you can see him working alongside Ron Howard so we are talking about an experienced director for sure. With so much going on in the plot of this film, that is required.

There is a cast of thousands here (almost) but the three primary characters are played by Idris Elba, Matthew McConaughey, and Tom Taylor. Elba is the gunslinger, a frightful presence for good. The things he can do while loading his guns in mid-air will be talked about for decades. McConaughey plays the Man in Black. He is a terrifying villain who does a LOT of killing, you could subtitle the film “How to kill 100 guys in 10 days.” Please note that unlike some modern villains, he doesn’t threaten he just kills. His was an excellent casting choice. Tom Taylor plays Jake, the protagonist boy the film revolves around. He has done scattered tv but a lot when you consider his young age. All three were fine casting choices and serve the film well.

This film is based on a 8 book series by Stephen King of the same title. I have not read any of them but I loved this movie. The story is as follows: Jake sees things and sketches them. He gets flack from his stepfather and kids at school for being a geek and a weirdo. He sees a tower at the center of the universe that protects us from all evil, a man in black who is attempting to destroy the tower through clairvoyant children he abducts through portals, and a gunslinger who protects the tower. When the evil beings that work for the man in black come for Jake, he escapes into a portal, meets the gunslinger and they are forced into a battle for everything good against evil.

I really enjoyed this film. That may be because I have read a lot of Stephen King’s novels so I know his hip writing style. This is a fantasy film that weaves in and out of the real world. You can’t try to make sense of the fantasy part because it’s inside King’s head. I for one enjoy going in there. I think to enjoy this film you must first surrender and expect nothing. That way, the exciting cgi monsters and action scenes will have their intended impact. If you compare it to any other film, you’ll be disappointed. It is simple and perhaps could have been more elaborate through 2 films, after all it is based on 8 books. Still, its simplicity makes it accessible.

I had a great evening at the movies taking this adventure portal. I recommend the ride to you!

2 Replies to “Review: The Fantasy and Adventure Success of ‘The Dark Tower’”