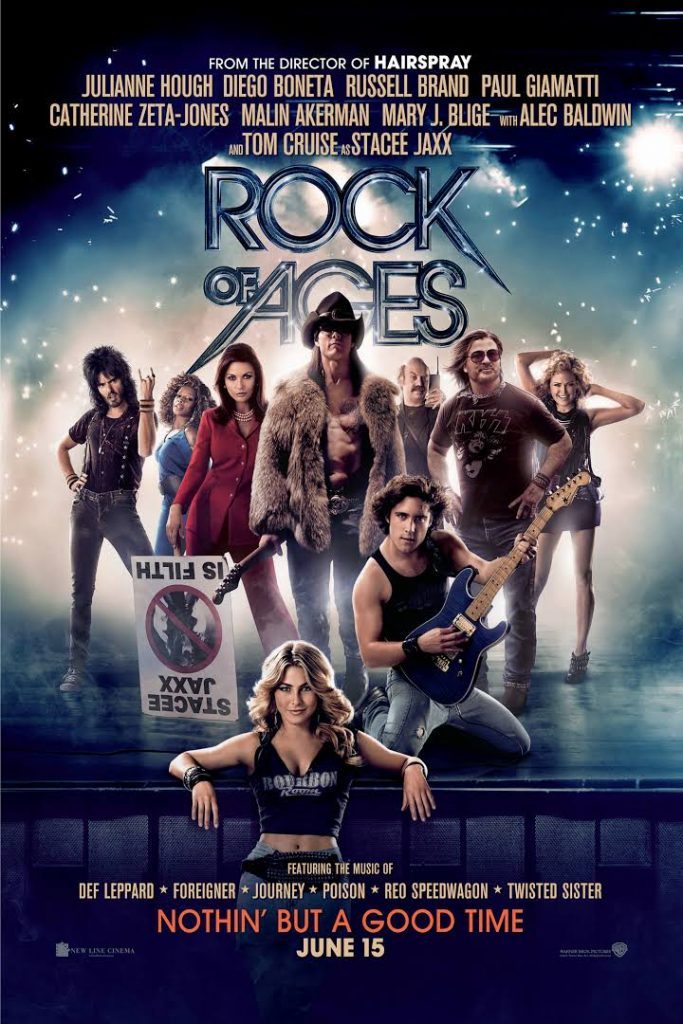 Rock of Ages is the film adaptation of a musical that has been going strong for years on the strip and across the country. It has both a mainstream and cult following. There has been much buzz about this movie and whether it will do justice to the musical that has taken the world by storm. Can the accoutrements of film achieve what musical theater has done? I just watched in XD and I’d say: sometimes, yes, and other times, not even close. One thing is the same in both however: the music of the ’80’s is amazing, without question. Rock of Ages features music from: Bon Jovi, Guns N’ Roses, Def Leppard, Foreigner, Journey, Poison, Whitesnake, Night Ranger, Twisted Sister, and REO Speedwagon.

The film was directed and produced by Adam Shankman, known for Hairspray, A Walk to Remember, and others. The film was written, not surprisingly, by seasoned, successful Hollywood names the accolades of which include: Wall Street, Megamind, American Psycho, Just Go With it, and others. From powerful rich writers to actors in the same vein, this movie has a cast of verified stars: Tom Cruise (Stacee Jax), Diego Boneta (Drew Boley), Julianna Houge (Sherrie Christian), Alec Baldwin (Dennis Dupree) just to name a few. The casting is good and I discovered when researching for this review that Tom Cruise indeed sang all his own parts. I had my doubts since they sounded quite professional in the movie. Tom Cruise pulled it off! The movie plays a lot like the musical. I recently saw it AS a musical at the Pantages in Los Angeles so I was certainly extra critical in my analysis of the film’s musical performances. All the actors could sing and their performances rivaled the stage versions.

By way of trivia, Def Leppard did not grant rights to use their songs in the stage musical. They surprisingly did however allow their music to be performed in the movie version. Tom Cruise sings an amazing cover of their “Pour Some Sugar on Me.”

This movie is a lot of fun and has great music. I felt like dancing in my seat to it. It does lag at points however and the Stacee Jax character is given way more screen time than his character merits. This is a love story and that is the focus of the stage musical. Stacee Jax’s character makes the movie boring at times. It is better when he sings. It was almost as if they felt they needed to showcase their big star (for whom they no doubt paid dearly). Stacee Jax had a much smaller role in the stage musical as it should be.

Here is a bare-bones synopsis: A guy and girl come to Los Angeles seeking fame and fortune in rock music. They pay their dues in bars, restaurants, and stripper bars until they finally achieve their dreams. Along the way they learn the pain of the city which includes an eccentric Stacee Jax as an unwitting teacher. He is the celebrity lead singer of a rock band that everybody in the movie virtually worships. There is a side plot here of religious people trying to get rock and roll off the strip. It smacks of Tipper Gore and her censorship crusade.

That is the movie in a nutshell. All throughout, you get amazing and inspiring music from the 80’s. To be honest, I don’t think they needed to hire so many A-list actors and writers, the music it what sells this one. No-namers could have done the job just as well. If you go, just go for the music and you will be delighted.

In my final analysis, Rock of Ages is a funny, touching, rocking film that most adult audiences will love. Overly religious types may be offended at suggestive scenes and material. There is a LOT of sexual content and imagery so if that turns you off, stay home. As for me, the free spirit of hair band music of the 80’s was refreshing and enjoyable. I like the spirit of the 80’s and what the bands represented and the pole dancers weren’t horrible either. As they sing so beautifully in the final scene: “Don’t Stop Believin’, hold on to that feeling!” I remember listening to that Journey song in the 80’s and I can say now all these years later that I am still holding on to that feeling.

2 Replies to “Rock of Ages”