Almost every movie can be defined as a mythic journey, even a teen love story like “Say Anything.” John Cusack is in love with a rich girl and he barely has enough money for the gas in his car. The movie becomes a journey from “dork” status to royalty when he finally wins her over. 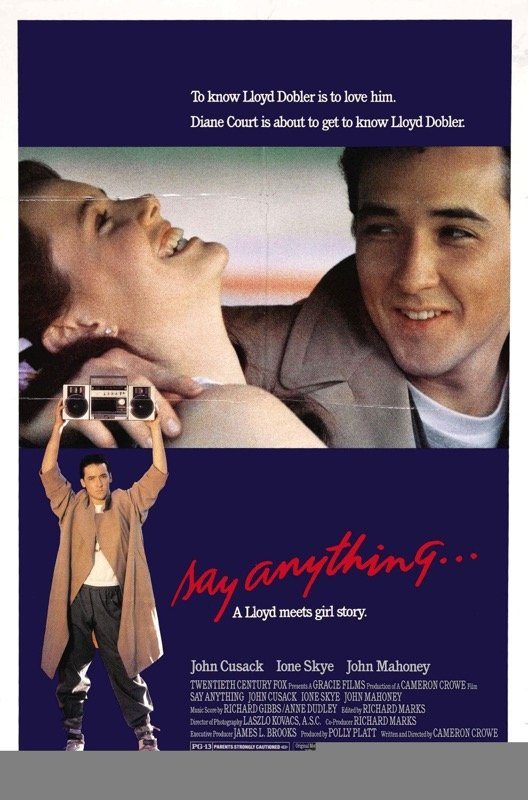 These are some really funny bits in this film. One I really like is when his friend is  playing 100 songs she has written for her unrequited boyfriend “Joe.” At one point she is in a bedroom at a party when people are drinking beer and listening to her sing these “odes to Joe.” One song lyric she sings is simply, “Joe lies … When he cries.” Please make sure you don’t leave the room and miss that scene.

Anyone who wasn’t sure what to do with their life after high school will certainly relate. John Cusack is the poor dude caught up in his passion for kickboxing. He gets caught up with a rich, smart girl: Diane Court. He tries to woo her but just for a date much to Diane’s father’s disapproval. It’s a common story but this one gives hope to the poor guy, this underdog.

What ensues in “Say Anything” is a heroic journey. John Cusack starts out a bit of a simpleton but ends up the victor. He wins the hand of the suburban maiden, played by Ione Skye. Many “best of” lists on the internet rank “Say Anything” near the top. It’s a lie story and a comedy about graduating seniors but the entertainment value is certainly suited to about age 14-?