The movie Secretary (2002 Rated R) seeks to portray sexual control in a relationship. This is probably a really hard thing to do straight out so the movie makes a sort of comic book story to get its point across. 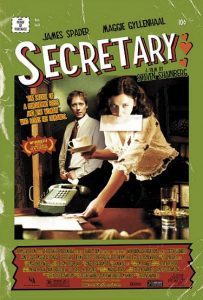 This film was directed by Steven Shainberg and stars Maggie Gyllenthal and James Spader and the couple it centers on. While the director is not known for a slough of films, the actors are well known for many movies. Both deliver passionate performances. There is nudity and once again, this is not a film for kids. It is however well acted and the writing is bizarre yet enjoyable. None of this is anything I do but it helps me get what this sort of stuff is about. I found that interesting.

Here is the storyline from IMDB:

Lee Holloway is a smart, quirky woman in her twenties who returns to her hometown in Florida after a brief stay in a mental hospital. In search of relief from herself and her oppressive childhood environment, she starts to date a nerdy friend from high school and takes a job as a secretary in a local law firm, soon developing an obsessive crush on her older boss, Mr. Grey. Through their increasingly bizarre relationship, Lee follows her deepest longings to the heights of masochism and finally to a place of self-affirmation.