MY teens were in the fat of the 80’s, really check this out: in 1980 I was 10 and 1990 I was of course, well you can add. Sing Street is streaming on Netflix and you should go enjoy that thing for all it’s worth! I completely urge you to. It’s about a boy about my age through the 80’s who wants a chick so he makes a freakin’ band! That was my 80’s as well. Sing street is like this and more ungodly great stuff. Ah, to be 16 again.

You can check this film out today on Netflix. It’s a story of a young lad in Ireland who finds himself changed schools and at a violent religious school (That’s a funny modifier right? Actually many people I know and have spoken with through the years would tell you it’s fitting). At any rate, the boy meets a girl a little older than him and decides to get her attention through forming a band.

I had a similar time of it in High School. Paul Flippowitz, a friend in my English class, came to me saying he knew Brad and Lance were starting a band. Of course I saw this as my chance to throw down on tape all the guitar I had created through the years so I jumpred at the opportunity. I was 16. I don’t have any before photos but here’s our reunion a few years ago. 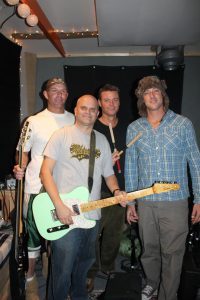 The character in Sing Street is a singer and somewhat of a writer. He has a pal he collaborates with that I think any songwriter has while going through those 10-20 years.

There is struggle, there is triumph, there is 80’s music. Duran Duran music is in it! Along with many other 80’s musicians. I do wonder why they chose to put Joe Jackson music in it. “Stepping Out” is probably the worst hit of the 80’s in my opinion.

FINAL THOUGHTS
Positive, amazing people I read and know in private life love this film as much as I do. Even some really negative shitty people have told me this film is amazing. Give it a try! I’ll remind you it’s on Netflix.

Now, let’s talk. Comments as a form are alive and well with celebrities and boring famous bloggers everywhere. Since I am fairly close to being boring and famous with my words, help me out and increase the comments PLEASE. I am on the verge of paying people to comment here, I am not joking.