I’ve seen paranoia around the ideas of NSA among friends and co-workers. I thought most of it was unfounded until I saw this film, Snowden. I’ll modify what I just said just a hair, I’ll replace the word “paranoia with “awareness.” People need to be aware of the surveillance going on in our private lives. 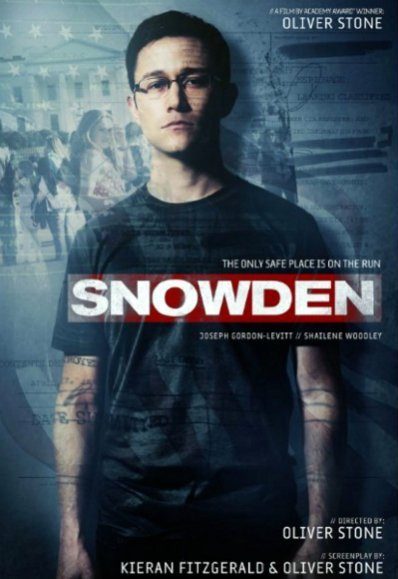 Snowden is quite a character. I really enjoyed watching this movie. I can’t say I would give up a posh home in Hawaii and a romantic lover just to inform the press about the snooping the government does. That’s just what he did though. Furthermore, he’s given up any chance of walking down Central Park or swimming at the California beaches. He did it for “us?”

Most of us know our employers monitor our internet use along with things like keystrokes on our work computers. They could have cameras everywhere and often do because they are your employer and they’ll fire us if we don’t like it. What I didn’t know until I saw this enlightening true story is that they have access to our wi-fi and other monitoring mechanisms in our homes. They monitor the world in hopes of preventing terrorism. I guess it’s working pretty well right? There hasn’t been another 9-11?

We see Snowden rise up in the ranks of the FBI and reveal for us the many ways the NSA peers into our private lives. It’s fairly well done. The way one reacts to is will depend on ones political sensitivities. Snowden is a real guy. You can Google him. AS a movie this is pretty good. It’s the subject matter that truly makes it worth the watch. But as you do, just remember, they may be watching you. You might ask yourself, as I did, if Snowden is a hero or just a guy who had enough. I recommend it for fans of the drama and mystery genres as well as those interested in the subject of internet privacy.