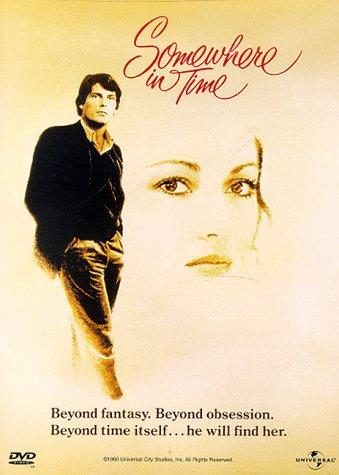 “A Chicago playwright uses self-hypnosis to travel back in time and meet the actress whose vintage portrait hangs in a grand hotel.” -IMDB

Director Jeannot Szwarc is known for Jaws 2 (1978) and Santa Claus: The Movie. These two samples show his work has a variety to it. Both also reflect the sing-song incredibly fun style of the late 70’s and early 80’s. With this film, he dips into both colors and paints a lovely portrait that still stands up today.

Christopher Reeve plays the lead role of Richard Collier. His stoic charm is unique and his acting skills truly make this character come alive, especially in the latter scenes. I’ve seen this film 2 or 3 times and I can’t imagine any other actor playing this role.

Jane Seymour is Elise McKenna, the arcane, beautiful, mysterious woman of the past. She plays well with Reeve and the other Christopher (Plummer) who takes the role of the nemesis William Fawcett Robinson. These three famous actors alone are reasons to love this film. They work together well and it is an excellent, heart-rending script.

There’s something different about this old woman. Collier senses he’s met her before. The butler at the hotel senses he’s met Collier before as well. There’s a whole lotta sensin’ going on! We have a time travel component here. How appropriate for a film made in 1980. Back to the Future and Peggy Sue Got Married, would soon follow. Will he discover who she really is? Time will tell. Therein lies the romance and this film is highly romantic. The ending can be debated but I contend it is one of the most romantic endings since Romeo and Juliet. One last mention: the piano driven soundtrack is heavenly.

FINAL THOUGHTS
Reeve and Seymour are in love and they shine like a cotillion. They aren’t like the cotillion you feel sick at due to formality though, this is the place where legends and dreams of true romance play out. I love this film, it’s another one like the Big Blue that puts me in a trance I don’t want to get out of.