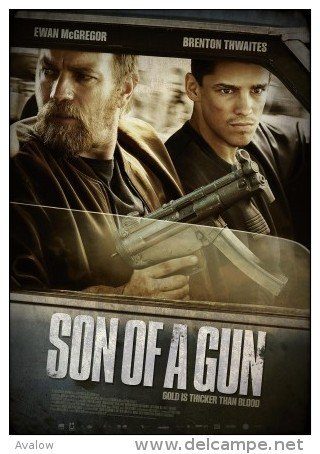 There is so much going on in this film other than robbing gold. Still, I kept getting excited about the scenes where gold was involved. There’s something primal about that I think. What child hasn’t wondered what a gold bar is worth? What movie watcher hasn’t wanted to hold one. That may be why the director chose it.

My one issue with this move is that entirely too much is going on. In the prison scenes, the guards are all victims. Much of the cast’s background is only scantily explained. For this reason, it lost a star with me which doesn’t mean I disliked it, just that it could have been better.

We get to see Ewan MacGregor kick ass. He may become the next Liam Neeson after this one. He never struck me as a tough or even large man but when he steps on screen he commands the rooms, the fights, and all things in his way. This level is the best one to defend this movie on. MacGregor has never been better in a thrill I have seen him in. You could be perfectly justified going to see it on that aspect alone.

This film tells a story that involves jail, but it’s not a jail film. There’s a girl but not much romance per se. There’s a grand elaborate scheme but you don’t get too many details, and as I said earlier there is the gold. Just a little more backstory on the some of the characters would have helped.

I’m beginning to think gore in crime thriller is becoming required by the studios. There is a lot of blood and gross scenes. I’m waiting for the crime thriller that doesn’t lean on blod and guts unmercifully to tell a thrilling story about crime. Having said that, this is a really fun film and it contains many of the modern conventional approaches to ts genre. Ewan Macgregor is excellent and really commands the screen. I recommend this movie highly.