A series of interconnected short films, “Southbound” is pure horror reminiscent of the 1970’s-1980’s minimalist styles. 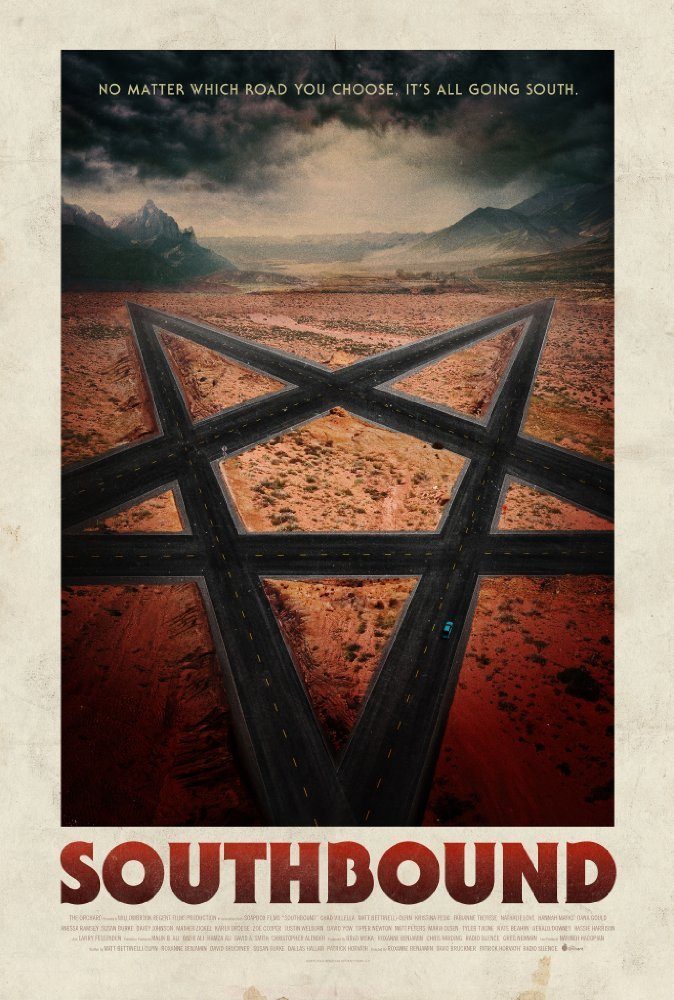 These small films fit into one another just like the Twilight Zone movies. If you’re looking for a common theme, you’re likely to be disappointed, There are these giant devilish skeleton bats that chase some of the characters, apparently for justice. Other than that, it’s just a fairly well made, and simply made, horror movie with a few clever twists.

There is one part where a man is distracted by his phone while driving and he hits a girl who had just escaped a satanic sacrifice ceremony. He calls 911 only to become more confused by what has happened and of course frustrated. Some of the stories are like that, unsatisfying.

Th giant bat effects ARE satisfying, along with the final scene where we are brought up to speed about what’s happening in the chase in the opening scene. The movie works like a circle, setting you on a path and then replacing you there after you’ve finished another story.

This film has a lot of killing and blood in it. There isn’t much explanation for any of it though. I suppose you could draw the conclusion that if you live an immoral life, you’ll have to reckon with the grim reaper or the devil or some being at the end of your life. Not a very original idea for a horror movie but there are enough clever twists to keep you guessing. It lost two stars with me for the lack of explanation about many elements in the stories.

I suppose it could be seen as the devil is coming for those who have killed or sinned terribly but they never say why. If you don’t mind open ended movies, you’ll probably not get my criticism. I like finding out why the mysterious things happen. It pleases me when everything fit, Southbound is a good movie but seems to leave so many thinking projects up to the viewer. For plain text horror with minimal production, I recommend it!

One Reply to “Southbound”