So much has been written about this film. It brought science fiction to mainstream consciousness like no other film before it. When I saw in the theater in 1977, I was 8 years old and immediately a fan. 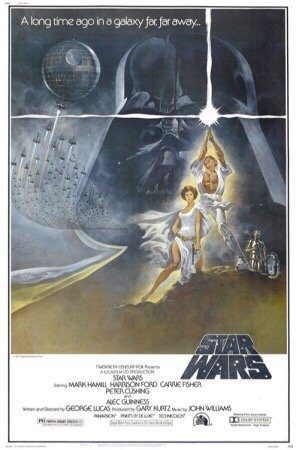 The film takes us along the path of a young Luke Skywalker. Luke has humble beginnings but once destiny meets him in the form of Obi Wan Kenobi, his fate to fight against the Empire is sealed. I liken Luke’s path to that of anyone venturing forth in her/his life. There are obstacles and dangers that threaten to take him out  of the game: Sandpeople, Stormtroopers, even Darth Vader himself. By the way, I don’t Elise that director George Lucas had pre planned to make Vader Luke’s father. There is no evidence of this until the second movie. I think the film did highly well so Lucas wrote a second one, and so on.

Once Luke’s journey is laid out for him, he meets up with a set of misfits like himself: Han Solo (Harrison Ford), Princess Leia (Carrie Fisher), Chewbacca (a creature), and of course, his mentor in the ways of a religion called “The Force,” Obi Wan Kenobi (Alec Guiness). They are all reckless and endearing characters. This film was released in the late 70’s when movies and tv shows about “real people” we’re ring released. Lucas makes his characters real and so we feel like we are on this adventure with them. That’s a major reason this film is embraced by so man people worldwide.

I must say a word about the music. Both George Lucas and Steven Spielberg enlist the magic of composer John Williams in their movies. This is vital to their success. Williams has the ability to create hypnotic and dynamic music to support the storytelling of Star Wars. It is possible, if you know the film well, to listen to the orchestral soundtrack and know without video or dialog what part of the movie it’s from. The music is as integral as the script.

There have been many movies made since 1977 that are part of the “bigger story” Lucas says. None, I might argue, recreates the 79’s Everyman tone of Star Wars. I have seen “Star Wars IV A New Hope” 50 times or more and would happily watch it again. I don’t have the same hunger to see “The Empire Strikes Back” or “Return of the Jedi.” Everything is deruvative and nothing can touch the genius of the first movie. “Star Wars Episode IV – A New Hope” is in my top 5 favorite films of all time.