Would you say being turned down at the unemployment office and then getting hit by a car sending you through the windshield would constitute a bad day? Yeah? Me too. Our victim in this one is played by Stephen Rea and believe it or not, it just gets worse for him from there. Rent on Amazon for $2.99. 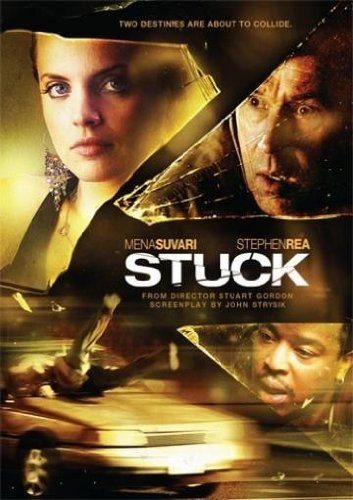 I really loved this film. Until I found it in a horror search, I had never heard of it. Our director, Stuart Gordon, has a resume a mile long but not filled with memorable films I’m afraid. Still, he has a “Master’s of Horror” directing spot under his belt and that appears to be his genre of mastery. I have no complaints about his work with this film. I feel like I ordered “horror and thriller” and got both as asked for!

Mena Suvari is the protagonist here, what a bitch. As if the poor guy couldn’t do any worse that fall through her shattered windshield, she leaves him in her garage overnight. That’s just sick. He of course lives and makes it through what seems like a few days pulling glass shards out of his mid section and calling for help. My lingering question was: “Who is more stuck, him or her?”

There is a tough-ass boyfriend and a bitchy boss. The characters here are all believable. It is a bit more thriller than horror but there was plenty to recoil at and be horrified by seeing and imagining. I really loved this previously unknown film, I give it a 10/10. Along with so many films, I am discovering more and more on IMDB advanced search.