(Audio and written review) “Swamp Thing” is a horror movie that at times may come across as a bit funny but it is meant as a serious film. It looks like a throw back to films like “The Creature from the Black Lagoon.” Continue reading my written review and/or listen to my podcast review below. In this case, the podcast has much more material. For example I do a short review of the foreign horror film “Them” in this episode. Listen in the player below and/or keep reading the review. 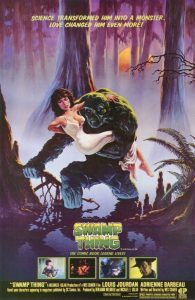 It’s from 1982 so there wasn’t that much of a challenge on films to have the perfect cgi and graphics. They did a pretty good job with effects anyway. It was direct by Wes Craven who we all know from a “Nightmare on Elm Scream” and “Scream” and many other beloved horror films. “Swamp Thing” is a Sci-Fi horror. It’s also a theme where the monster grabs the woman and she screams but the creature does not hurt the woman. We see a similar thing in “King Kong” and “Creature from the Black Lagoon.”

We have a scientist who is trying to make something that will cure the whole world’s hunger problem. He’s a “good guy.” The chemical he is working on explodes in his face as bad men are seeking the formula. As a result, he become 1/2 man 1/2 animal. His suit is both rustic and great. By today’s cgi standards they could have done a lot better but it’s still great. At one point he throws a lot of people. This is done in a rustic and funny fashion, almost like 70’s television: the “A Team” and stuff like that.

The woman is Adrienne Barbeaux. She starts off homely but as she sheds clothing and starts to go on the run, she reveals that she is very hot! Never judge a book by its introduction!

So in this film, we get it all: a creature and a beautiful leading lady. I greatly enjoyed this film and give it an 8/10.