This Jerry Bruckheimer production truly “brings it.” On the heels of Pirates of the Carribean, this mega-producer was able to produce another highly entertaining Summer swashbuckler for Disney. It is partially based on the popular video game of the same name. 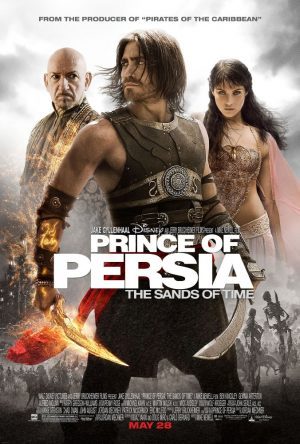 Jake Gyllenhaal (Jake from here on out) plays Dastan, a street rat who becomes a prince. Sound familiar? No, actually other than that there are no parallels to Alladin. He obtains a dagger that is able to rewind time one minute in duration. Naturally everyone wants this dagger so he must keep it safe. Gemma Arterton is the beautiful princess who is charged with the task of getting it back from him. Dastan wrongly believes she wants HIM and not the dagger, as every prince probably would, but he is mistaken. Their romantic comedy banter back and forth is some of my favorite stuff from this film.

There are a couple of actor heavyweights in the film as: Ben Kingsley and Alfred Molina. They bring a stoic feeling to the film. Both are very physical in the film, along with Jake. They appear to do many of their own stunts including Alfred Molina’s harrowing scene when he kisses an ostrich. I understand these are mean animals and yet, they manage to be ridden in the film without the use of CGI. Quite amazing if you asked me.

The film looks like a sword and sandal epic but feels just short of it at times. It isn’t a bad movie but it’s not as good as The Gods of Egypt or The 300. The story is a bit complex and I think could have been more engaging if it were whittled down and simplified a bit. Despite poor reviews and some stale audience periods, It did gross over 300 million dollars so something definitely is there that kept people swiping their cards and slapping down bills at the box office. I would recommend this film for fans of Jake or possibly the video game (I’ve never played it) but ony after you’ve seen everything else he’s done. I think you’ll find it a lot of fun in a branched off performance for him.