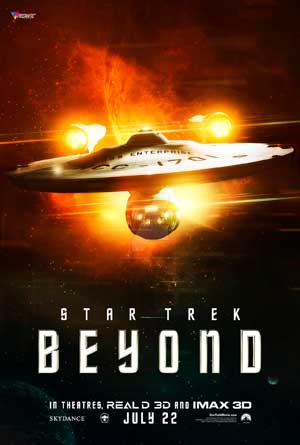 I saw Star Trek: Beyond last night on its second night after release. When I see Star Trek films, I usually miss some secret winks because I am not much of a “Trekkie” and therefore don’t know the labyrinth of secret passageways that many others I meet new. In fact, my wife, who is not a film critic, explains a lot to me when we go to see these films. Last night had a few parts I couldn’t figure out but I’ll avoid those.

Instead, I’ll tell you that Captain Kirk is put in a position to save the galaxy (common theme). The adventurous quest to do that is a rip-roaring ride! Directed by Justin Lin (Fast and the Furious), the spaceships are now the race cars. There is a lot of action in this film but I must disagree with some other critics who are saying it’s too fast and furious. There are moments of suspense as well and moments where the viewers is ban rest, stop, and get cerebral..

The visuals are stunning. Because this is a quick review intended to have “no spoilers,” I won’t describe them to you. I will say that in 1977 when Harrison Ford, Alec Guinness, and Mark Hamill saw the death star for the first time, it had a mind-blowing effect on movie goers. There is actually some stuff in this film that will leave you in “shock and awe” in a similar way. Please note however that the plot is pretty good and special effects are secondary to that, which always makes me happy.

There is so much in this film worthy of the ticket price. There is a side story Spock is dealing with, sense that virtually fill the movie with the now departed Anton Yelchin, a Smokin’ hot Zoe Zaldana, a vaguely funny Simon Pegg (but funny all the same.) I had a blast watching this film. I anticipate Trekkies will like the new villain Krall (Idris Elba). He’s a tortured creature with a lot of hate for the federation which makes for some really juicy fight scenes. I did have some issues with the film. Instead of developing the villain they sort of catapulted him into hate mode. I wanted to know more about him and why he became who he was. It was explained a little in a very rushed fashion in the last 1/4 of the film but I think doing that earlier would have invested me more in his character. For the haziness of the villain, I took one star away. This is an amazing film, I highly recommend it.