Wealth set against a background of poverty is an excellent canvas for a coming of age movie. Our protagonist, Jim, loses his parents, their money and his “way.” What follows from there is a magical journey of fighting, surviving, and ultimately surrendering. The transformation teaches us something about our own lives. 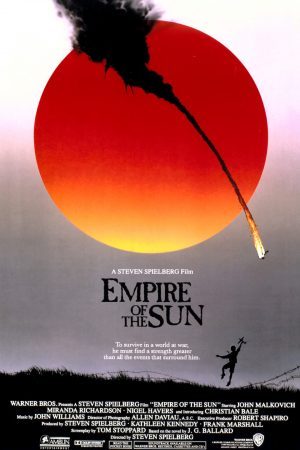 Spielberg made this film true to the time and to the international conflict of that time. Still, it’s a universal coming-of-age journey. Jim is the young English boy who is living in Shanghai, China in the lap of luxury. His parents pay a servant to look after him and feed him since they are often gone. We hear a little from the father about the situation and the mother is close-lipped. When WWII begins, tables are turned on Jim. The whites are being forced out of Shanghai after Pearl Harbor set the war in motion.

From there the movie starts speeding up. It becomes the journey of young Jim and there are many hurdles along the way. John Malkovich is a street savvy white man who sort of takes Jim in. This adds a compelling acting set to an already alluring introduction.

Jim is verifiably bratty. In the early scenes he bosses his nanny around and reminds here that she “must do what [he] says.” When the reversal of fortune occurs, he tries ordering her around again and she surprises him with an act of disrespect. He is blown away.

The separation from his parents and the complete lack of money brings Jim to his knees. With a sullen, oil stained face, we staggers around looking for his parents. HE reveals what a spoiled kid he is through these scenes. He even tries to surrender at one point but the soldiers just laugh at him.

My word to the wise: This film is about Jim’s journey. It’s an everyman journey to be sure. I feel Spielberg used his common approach which is using metaphor to illustrate the human journey we are all on. It could be a war zone in China or a backyard with an alien in it. There are always personal human conclusions to draw from his film. Yes, Jim is a brat, we are meant to hate him in the beginning. But is he so different from us? As you watch this movie, ask yourself if you could have been the same way without the same advantages we have. This is not a movie you merely watch, you feel it. Jim undergoes a telling transformation. In fact, there is a lot being taught to us my Steven Spielberg Because it’s an artful film that speaks eloquently to the human condition, I highly recommend it to you.