Emma Watson ladles through this historical drama, “inspired by true events.” There are elements of cults and what they do to their members in this but it’s really about one in particular that had a truly evil leader and was eventually tried and convicted as such. 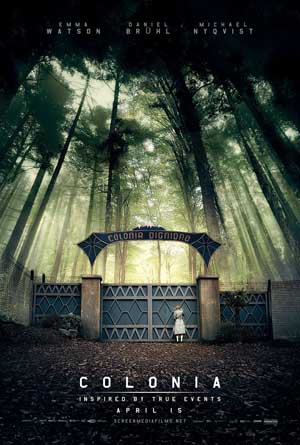 I often wonder in my life’s travels how many people know what a cult is? I do. I had experience with one in college that I’ll never forget. It started with me attending their little “bible talk” and before too long they were pressuring me to move into a “shepherd” brothers house and pay part of the rent. For God, nonetheless. Before I got too involved, my Dad got wise to what I told him and explained they were a cult on campus for years. That’s when I quit going to meetings. Colonia is a true story about a cult in Chile. I think it has existed up until the early 2000’s. In the film, once you enter you can never leave. In fact, up to the time the story takes place, no one had ever escaped the cult. That’s what makes this story interesting.

Emma Waston and Daniel Bruhl play Lena and Daniel, a Chilean Professor/activist and his English stewardess girlfriend. When a coup erupts in Chile, Daniel is captured. The activists tell her he has been exiled to the Colonia Dignidad, a world-famous frightening place where the members stay for life in a brutally neo Christian environment. Sins are punished by group slapping, to name one torture. When Lena hears her love has been taken there, she realizes her only chance to save him is to enter the cult voluntarily. She does, and a large segment of the film shows the torture she endures at the hands of this sick cult. Michael Nyqvist plays Paul Schäfer, the charismatic and frightening leader of the cult. We learn later he has impregnated, raped, and tortured thousands of members in the cult. He does a great job playing the part. I always wonder what the actor’s motivation could be for playing the part of a cult rapist. No matter, he finds it and he ends up playing this role quite well. 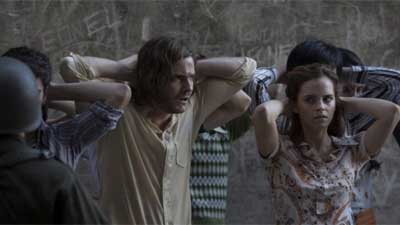 It’s interesting watching Watson adopt the tenets of the cult. Several times, he tests her. It takes many days before she sees Daniel alive there. She has to go on faith that he is there and that she has done the right thing coming to the site. Daniel has to pretend he’s retarded as a result of a terrible beating he receives. It’s smart because they send him to the commune since they feel every person has a purpose. There are some terrible scenes of abuse. When Lena is working in the fields the first day she says she is thirsty. One of the leaders, an especially evil one, brings her a bucket of water telling her to not drink it but rather carry it with her all day. In another case, a woman shares she is to be married. This is forbidden in the commune so the leaders subject her to a public “slapping” or beating session to the point to where she must be hospitalized. Even the man who she was supposed to be married to must deal blows on her face. It is a barbaric scene and apparently the kid of thing that went on in Colonia.

Emma Watson plays the role barely well. I find her a little too unaffected by everything. I think she plays sheltered roles well but when it all comes down to her and her agony, she falls short. In this role, she is a bit weak that way. In a similar fashion, Daniel Bruhl is hard to relate with. I found both of their faces and delivery of dialog vanilla. These roles call for a dynamic set of emotions and neither seems to exude that. But, at the end of the day, the story itself is not all that engaging either. It was not promoted well and there is a bit of false advertising in it. You can watch the trailer or read the ads and then later in the film think to yourself, “I’ve been duped, this is not what I thought.” I like historical films and this is based on a story but it didn’t play out like a movie about cults. Instead, it was about torture and evil people. It would have been nice to see a little more on the psychology of cults and communes and a lot less of the coup material. 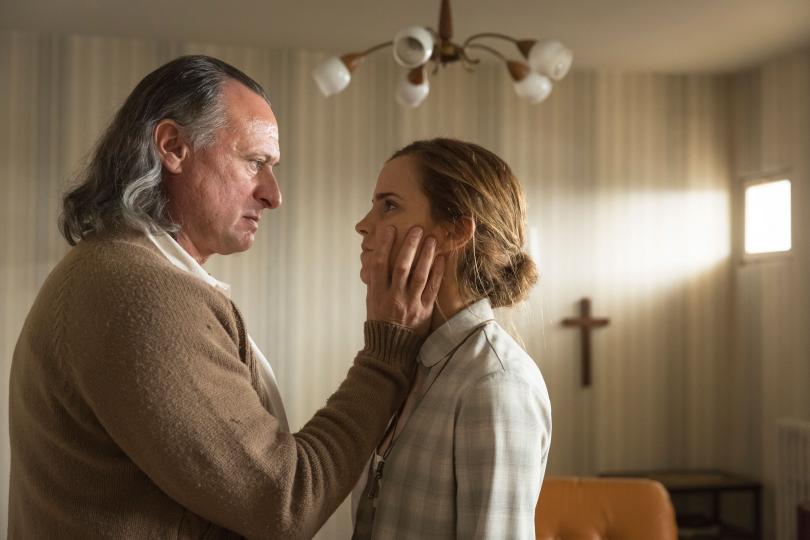 Years ago I had a college writing teacher who would tell the class “Focus on one thing.” I think Colonia focuses on too many things. Occasionally a film can get away with multiple items to focus on but usually, the good ones I remember have that overall focus. The one in this film should have been the Colony because that was the title. It should have started at the gate going in. The coup in Chile really has little to do with the cult stuff. It could have been portrayed quickly in the introduction. As it is you have to wait almost 1/3 of the film to get into the commune and even then, they are still building up to what’s really going on in there. The final scenes are great. You feel elated as they escape to the airport and somehow convince the pilot to fly them away, even with Chileans with assault rifle banging on the door. It’s a great ending to a so/so movie. It lost points with me in its story because it wasn’t focused enough. Furthermore, I thought Emma Watson was miscast. This role needs someone who wears their emotion on her face, blood sweat, and tears. Maybe in 20 years we’ll see that from Emma but she’s not showing it enough in this film.