The debut feature film from “Daniels,” aka directing duo Dan Kwan and Daniel Scheinert, has a lot of people talking: mostly good, a tiny percentage bad, all expressive because this is an atypical movie that emanates expression. These guys are known for their quirky short films that reveal a human side struggling in a dark society. Swiss Army Man falls right into that category only in a feature length. 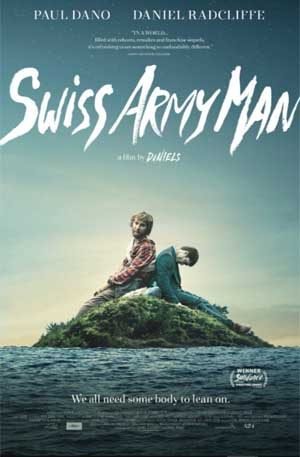 Swiss Army Man is a story about Hank who is stranded on a desert island. He is trying to hang himself when he sees a man wash up on show, Manny (Daniel Radcliffe). He rushes over to him to find him dead but the dead man keeps farting. He discovers it isn’t a loss that the man is dead, he has farting powers that make him function like a jet ski for Hank. Hank is able to use the dead man to get to the other side of the island. As Hank continues his quest to “get back” to civilization, he discovers Manny has all sorts of special functions that help him survive. This is where the title comes from: “Swiss Army Man.”

I want to address the film’s use of farting, since it has become a point of criticism online and it print. Apparently, a small percentage people walked out of the theater at Sundance during one of the farting scenes. I find that laughable that critics would walk out on any movie, much less one screening at film festival. The Daniels addressed this as an exxageration. They say of the 1500 people in the theater, maybe 12 walked out which was 1% of the occupancy. I had a completey different reaction to the fart scenes. I saw them as representative of life. Fart sin this film are the things that bind Hank (Paul Dano) and Manny (Daniel Radcliffe) together. This film doesn’t concern itself with the cool things that usually make up a popular movie. Instead, it points out that things like farts separate us from dead bodies. If a dead man can fart that much, it’s like he is alive. The use of farting to make a point is minimal in my opinion and shouldn’t be criticized. 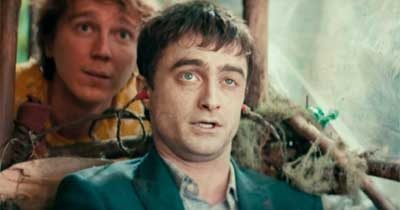 Though we’re not sure if Manny ever really comes back to life, though I’d assume he doesn’t, Hank has lots of conversations with him. It brought to mind the way we objectify friendshsips. We assign meaning to our friends and imagine them as they play out our fantasies. Hank teaches Manny all about life as he knows it, and that is pretty grim. He has no courage to approach a girl who he knows has a husband and who he has seen on the bus and taken a photo of on his phone’s wallpaper. This is disturbingly odd when her identity is brought out. if he has a stranger’s photo on his wallpaper, can he even have any relationships on his own? We are given a lot of information but left to interpret it for ourselves. One interpretation might be that Hank is clinically depressed and a sociopath, unable to have relationships with others. As a result, he has taken to the woods with a dead body to serve as his companion. While that may sound extreme, he could be a murderer and a stalker living in the woods as well. There are many shades you can see Hank as.

One hugely effective aspect of this film is the music. It is performed by Andy Hull and Robert McDowell from the indie rock band Manchester Orchestra. There is even some singing, though not a lot. Music is used artfully and weaves throughout this film making it half orchestral and half rock sound.

There is so much life in Hank and yet he is cloistered away from others, except Manny of course. As Hank “teaches” Manny about love and girls, he makes dozens of props to replay his day on the bus and many other times he can in contact with love. There are some heavy statements made about religion and sex. It gives us a chance to look at these things, even look at our own lives in a safe environment with no one there except a dead guy.

There is a lot of unraveling that goes on at the end. It happens so fast, it’s hard to formulate exact answers to some questions. Was the island real? Where were Manny and Hank REALLY? How long was Hank out there? I certainly have my suspicions about what the answers could be but this film is put together loosely so it many me impossible to prove one conclusion over another. For what it’s worth, here’s my spoilers of the plot and ending: 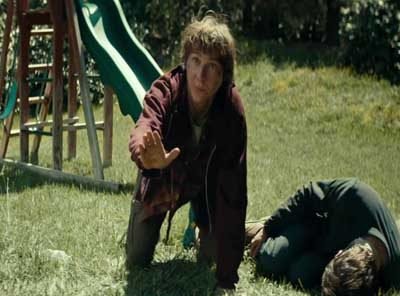 I think the beach was a figment of Hank’s mind. I think he was not lost but “camped out” in the wooded area right outside Sarah’s (Mary Elizabeth Winstead) house like a stalker. Sarah was the girl on the bus that he took a picture of for his wallpaper . I think Hank was already psychotic but he was still a warm, compassionate person while in the woods. Again, the Daniels’ recurrent theme of the oddball, the outcast being as normal as anyone but unable to break through society’s walls. I haven’t figured out where the dead guy Manny came from but with him there, Hank was able to examine his life for the first time in a long time, maybe ever. In the end, my guess is Hank was shot by a policeman and then he dreamed the final scene as he died.

I say this knowing full well there are other rational and valid ways to inerpret the film. Please share your thoughts in the comments. This film was awesome and I am so glad I drove 60 miles to an independent theater to see it. It lost nothing with me. I’ll be watching for more spectacular, cerebral stuff from the Daniels. This is one of those movies I call perfect.