Blake Lively shows some incredible strength as an actor carrying 2/3 of the film on her own in the water trying to get to safety against a gargantuan shark. Along with excellent writing and acting/directing, the effects are effectively terrifying. 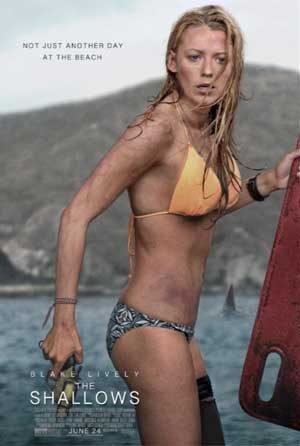 There are quite a few films out there that feature a blond girl surfing. Blue Crush, Soul Surfer, Aqua Dulce, and more. The posters are like this one, full of a beauty with a board. That is usually all it takes to bring a big crowd. In this case, while the image is the same, this is not just a girl surfer movie. Blake lively had a surf double, Isabella Nichols, who is the no. 1 junior champion surfer in the world. But with surfing scenes excluded, Blake did most of her own stunts. This is a very physical film and sometimes her physicality is crucial to telling the story. Plot is limited. Nancy (Blake Lively) is recovering from her mother’s tragic death by traveling to Mexico for some serious surfing. IN a very beautiful and secluded cove, she finds some near-perfect waves and starts enjoying them. There are two Mexican dudes there and they seem much more at ease with the beach than she is. They call to her but she never gets close to them. The guys leave and Nancy is face to face with a shark. What happens next is what makes it a thriller.

The following 2/3 of the film consists of basically one actor (Blake Lively), a big scary shark, incidentally the shark looks great, and an endearing seagull that Nancy talks to and is comforted by. 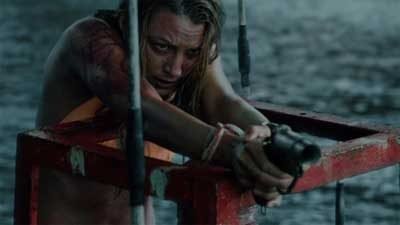 You wouldn’t think that thrills and suspense could be generated with such minimal props but they can be and they are in the Shallows. There is an excellent use of 1/2 above 1/2 underwater camerawork. Instead of being clueless what’s going on under the surface, the director shows you and it’s even scarier. I have to take issue and challenge the movie calling itself horror. While there are unpleasant jumps here and there that shock the viewer, it’s a bit too “woman-against-nature” Survivor-like to be considered horror. If one of the surfers was a serial killer as a side story, I might accept the label as accurate. As it is, I see it as a thriller and a great one at that. 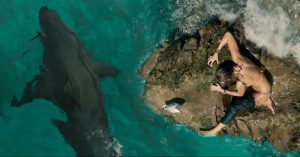 This is not Jaws but several times it spikes the same level of scares. From beginning to end it had my attention, I was never bored, and a few times I was shocked out of my seat by what I saw. Much care has been given to the CGI and props to make the shark attacks look real. The “final battle” between the shark and Lively is the stuff that award-winning thrillers are made of. I absolutely loved the way the director handled that. The Shallows is a top-notch thriller made with simplified tools. Blake Lively gives a strong physical and emotional performance. The film looses no stars with me, I give it a 5/5. Go enjoy it while it’s still in theaters.