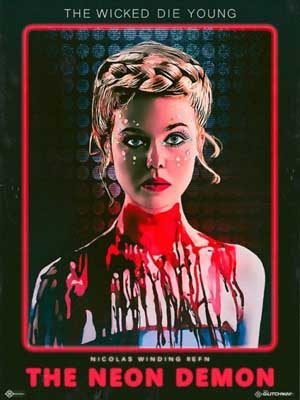 L.A. looks like a cut-throat place for the fashion profession in this film. Elle Fanning plays a 16-year-old girl trying to break in by any means necessary. She’s willing to lie on documents about her age and hang out with dangerous people if it means a chance as a famous model. There’s some fake blood here and a startling wildcat that jumps by the window in the dark but neither of those things constitutes horror. You may be shocked by the ending but I doubt many would consider that a “scare” either. It’s more disgusting than scary. I’ll acknowledge right here that there may be intended metaphors and alternative interpretation going on here. I’ve chosen to not look into that. Mostly for the reason that the film made no attempt to explain it to me.

Keanu Reeves plays the landlord who appears to exploit kids. I thought he did a great job with his voice and movement. It was like he was a different person. That’s a sign of a studied actor. I think Keanu plays the same character again and again but in this one he is unique. So, if you’re a big Keanu fan, this might be worth your time. The celebrity photographer “Jack” is played by Desmond Harrington and he does a pretty decent job looking resolute and creatively twisted. Unfortunately for me, I binge-watched Dexter years ago and I got used to his character there night after night. I kept expecting him to call Jesse “Deb.” Amazon produced this film. I wonder if we’ll see much more of this from them. This film was a basic let down and bombed at the box office proving that hand over fist. The reviews have been polarized, mine unfortunately is closer to the South.

While this film may not be correctly labeled as horror, it is a neon art-film treat for the rods and cones. I was drawn in early on by the visual artistry of the film. Just when you think you’ve seen the best it has, it brings more. The colors are reminiscent of Tron. I think it’s meant to draw us in that way. The director is a visionary influenced by Kubrick, David Lynch and others who have done similar things with color and space. Unfortunately this story gets caught up in a fashion world and doesn’t explore what’s going on in the head of the protagonist. Beside that, the characters are underdeveloped. Having said that, it’s a pretty simple reason to be ascertained why they do what they do in the end.

It’s nice to see a film with a message against underage modeling and what it can do to women. Unfortunately, there isn’t enough horror here to justify being in the genre. I wonder if I speak for anyone else when I say I don’t care to go into a psychedelic reality of modeling, unless it’s Zoolander (I).

If you have patience and you are really interested in how women can exploit other beautiful women out of jealousy, this may be for you. Or, for those interested in an amazing visual experience (strobes and neons) you too may like it. For everyone else I don’t recommend this one, I was rarely entertained as I watched it and the end was quite disappointing.