There’s a new foil for movies and it’s getting more and more prevalent, especially in holiday trailers. It happens when misinformation is conveyed about what a movie is about. This is a funny, cute, well-made animation film but it was advertised to be something that it’s not. Kids are likely to enjoy this more than adults, there’s no humor for grownups. 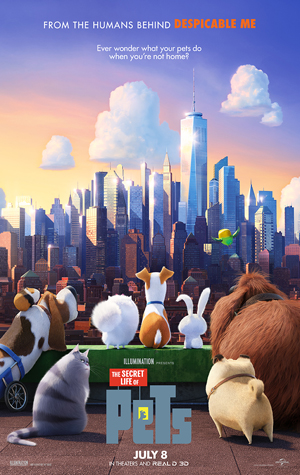 The Secret Life of Pets
Cast

The Secret Life of Plants (1973) is a book by Peter Tompkins and Christopher Bird. It was once part of pop culture consciousness. Among other things, the book and study indicated that plants grow better when they’re spoken to. I can’t help but suspect the sound of the title resonated well when they named this film. It was advertised of a year with a trailer that should pets doing things in their apartments: playing records, rocking out and head banging, and getting a massage from the electric mixer whisk. Those are only the initial scenes. After that they leave the apartment building and have a rip-roaring adventure on the streets of New York. This is no “mellow at home” peek at the secret life of Pets, which is unfortunate, I would have liked to have seen an understated funny film like that.

Katie is Max’s owner, he’s a little white dog. She leaves him in the apartment every day when she goes to work. Through a random sequence of events that don’t need detailing, Max is kidnapped. The dogs in his building, led by Gidget, a female white fluffy dog. The movie consists of finding and rescuing Max. I might add that the kidnappers are a rouge group of animals that have escaped from the animal shelter. The number of animal characters is overwhelming. Short little gags bring you back but most of the movie it’s hard to follow the motivation of any given character. It is a children’s film so I ignored that flaw. Still, movies like Toy Story showed how to have a lot of characters without losing the focus on the primary characters. 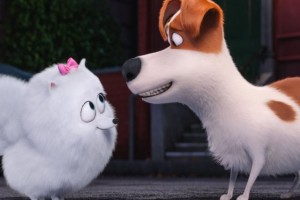 There are interesting voices here but honestly, they sort of fade into the collage of action happening in the movie. I usually am very curious to look up who the voices are, not so this time. It’s too busy to hear any soul or expression from the voice actors. There is a scene where Duke is pulling Max on a rope through the water and he says: “You’re not doing great but you’re not drowning and that’s something.” I think that summed up the film for me. It had the flash that would attract the kindergartners but won’t charm the older kids or the adults.

The best thing about this film is the small gag stuff, I wish it had a lot more. For example, when the pets are cleaning up after their party, one yells to the hamster atop the vacuum “Myron Vacuum!” Myron is riding the vacuum in a hilarious way. You have to see it to laugh I think. There are a handful of moments like that. They hold the attention of the viewer. The story is not very tender or endearing. There is never a reference to what time it is that would bring the suspense up remembering when the dog owners are coming home. It felt like they deviated from the original idea and added a Flushed Away type adventure that would be fine for another movie but not this one. This film aspires to be something original but ultimately, it’s like so many other animated films we’re seen come down the pike in recent decades. Because the writing was not endearing to the animals it portrayed and because I felt it was advertised incorrectly, it lost two stars with me. I recommend it for very young kids, say 11 and under.