Horror, Sci-Fi, and Thriller never looked so good in a film. It’s been called “The Most Claustrophobic Film.” I would agree with that. For horror fans, those scares are met by the incredible performance of Nicole Alonso. The Director Oklahoma Ward has created a film that sends fear down your spine and makes it impossible to turn away. Several elements work well to make this a perfect indie horror film. 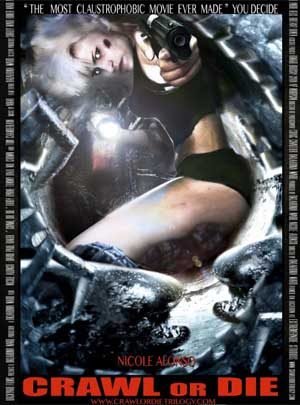 Just like rock and roll bands try to play what rocks, so horror directors try to know what scares. As long as I can remember people have said claustrophobia is one of the most universal fears. People don’t like being in an enclosed space. Crawl or Die plays on that fear and believe me, it scares!

Furthermore, the fear of unknown creatures is another fear of many and Director Oklahoma Ward weaves a really scary creature into his film. These scary aspects combined with the extreme physicality of Nicole Alonso as “Tank” make Crawl or Die a horror, sci-fi, thrill ride of a film.

A high level security force is chosen to transport the “package,” the last woman on earth that can become pregnant. The earth as we know it is gone and the continuance of humankind rests in the safe passage of this woman.

While transferring this package, the team has to find its way through a labyrinth of pipes and tunnels. As if that wasn’t bad enough, there is a hungry creature that lives in the passages, coming to feed on them.

*The rest of the review may contain minor spoilers

The star of the movie is Tank (Nicole Alonso). She plays an angry, sexy, soldier role in the manner of Avatar‘s Trudy Chacón (Michelle Rodriguez), Colombiana‘s Cataleya (Zoe Saldana), Alien‘s Ripley (Sigourney Weaver), and the like. Alonso’s physical acting is extreme. You see her pulling her own weight to and fro inside the pipes with artistry and grace. She is fun to watch and definitely easy on the eyes. At the same time, there is a determination in her eyes that builds suspense and keeps you guessing about the horror that is right behind them all. 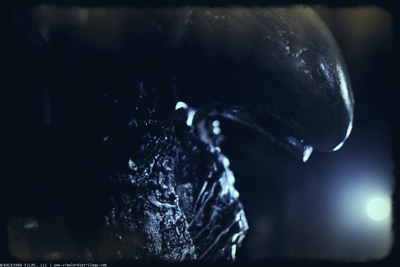 The creature definitely adds to the terror. In the scenes where you expect the creature to appear, Oklahoma Ward (Director) has deftly added subsonic beats that are choreographed to stop. In some of the early scenes, it seems an eternity before the creature crumbles its spider-like leg through the dirt. This works perfectly to release the scares that are not always that scary. It’s more the waiting on bated breath that creates the horror. Having said that, there are plenty of scares that send chills down your spine. It’s refreshing and remarkable what Ward and Alonso did in this film with such a simple set and formula. This is definitely a movie-makers movie as well as a critic’s film. There is much to talk about. I know I’ll be looking for an interview with the makers soon.

To expand on the “simple conventions” idea: I noticed the team used flashlights in an interesting way. They hung them on their boots as well as held them in their left hand while holding a gun in their right. I suppose when you are in a tunnel that’s getting smaller, you hold your light just about any way you can. The gun is a good thing too although it appeared that even an AK-47 assault type rifle cannot take out this monster. I’ve read online that this is to be the first film in a “Crawl or Die” trilogy. I will be eager to see how Ward uses more simplified effects to produce scares and suspense. As an independent film trying to use minimal budget and conventions to scare, I give this film a perfect score. I am a fan now and am looking forward to next one!

You can follow what’s happening with the Crawl or Die trilogy here.