Fans of horror films know that some are genuine works of art like the Monalisa or Starry Night. They look past the things that shock others etc. to unearth a spectre of understanding of human greatness on the screen. This film is one of those for many horror fans. I truly hope more people, including non-horror fans, get a chance to see this lovely foreign film. 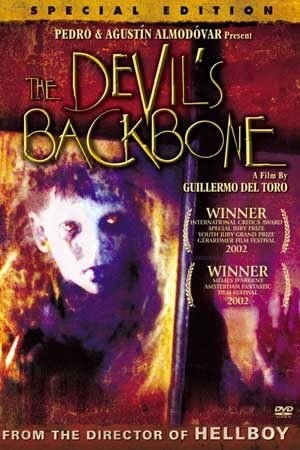 What are ghosts? Why do we get scared as children when we hear ghost stories? These are primal questions we may never have a scientific answer to. In this film, ghosts are beings that are stuck. They keep doing the same thing and it is thought of as haunting. Carlos is a boy in an orphanage in the Spanish civil war. His father has died in battle but no one tells him. Instead, he is abandoned at a small orphanage. In front of the orphanage is a mammoth sized defused bomb. This is that backdrop and setting for this drama that contains elements of horror.

The ghost is referred to as Santi, or “the one who sighs.” He looks a little like a zombie but he can talk and probably use reason. He was once a boy just like Carlos. Santi seems to be somewhat of a protector of the orphanage. His mute eloquence speaks volumes about how war is hell and how men can be overwhelmingly evil.

This film is a beautiful painting. Guillermo del Toro calls it his “most personal work.” When the boys get into their mischief, I couldn’t help but imagine a young Gullermo there. The horror is scant but it serves it’s purpose in telling this entrancing story. The characters are so well written and played, I felt I was watching a live university theater production. There are tons of quotes shared by the narrator and after watching it I felt wiser. There are subtitles and the film is entirely spoken in Spanish. Still, the cinematography and deft writing kept my eyes glued to the screen. I do speak Spanish but I am not a native speaker. I gladly read the subtitles that capture some subtleties of the language. This is beautiful film to watch and to listen to despite the subtitles. There is so much else here. Any horror film lover must see it and even if you aren’t one, this is an incredible drama with ghosts, fantasy, and revenge.

The antagonist is a class A asshole. I’ll spare you the spoilers but you will enjoy a few things surrounding his story. Towards the end you start to wonder who is a ghost and who is not. All in all, this beautiful piece of cinema serves to display the hell of war. It also raises the question of what ghosts are. Can they exist outside of religion? When we fear them, perhaps we lose sight of their help. Guillermo has said in so many words that we should not fear the dead as ghosts but the living. When we examine war and what it does to people, even children, we should remember that suggestion of his.