Some cannibal footage is Nat Geo, other is embarrassingly faked, and yet other footage is so well done it’s scary. “The Green Inferno” is a cannibal movie done so well, Nat Geo may purchase clips for its nature show. 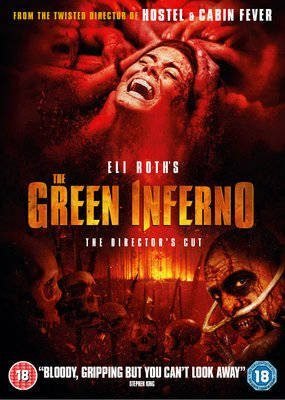 We are all such idealists after we graduate from high school. People often enlist in the Peace Corps when they want to make a difference. And there are those “groups” at colleges. Remember those how hand out leaflets and say things like “Don’t think, ACT?” This film starts out on a college campus where a group of activists are recruiting fresh meat.

It’s amazing and scary to watch the scenes at this point. Much attention to detail has gone into making the viewer believe these people are being sauteed and eaten. Justine (Laura Izzo) does a great job as the protagonist. She learns some hard lessons as a result of going on the trip. There are others that didn’t make it who may or may not have learned lessons as well.

This is a graphic, bloody, unapologetic film. There were times I got chills of fear but I never could turn my eyes away. This film took a lot of work to make happen. The cannibals seem like real cannibals. The director did a really good job assembling them and getting them to tell their part of the story through acting. It’s a truly great horror movie. I recommend it!