I’ve thought of Iraqi war veterans as many things, all good and full of resepct. Still, I never thought about them being adrenaline junkies. That is Katheryn Bigelow’s main message it would seem in this war thriller. It’s an interesting take, how young men might be trapped in the hurt locker ready for more. It’s neat to look at but let’s not forget sp many things are are screwed up about war. There’s a lot more wrong than wanting to get to the next level of a would-be video game. 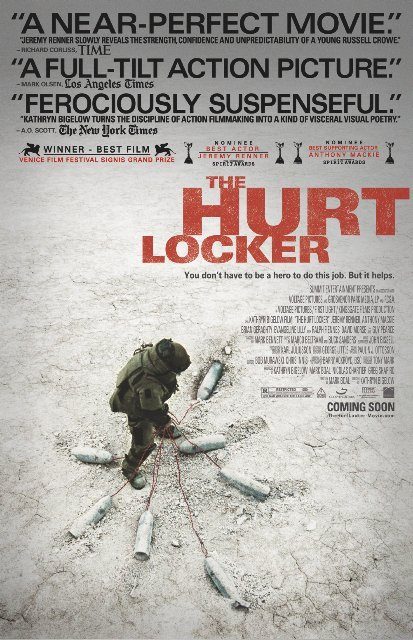 During the Iraq War, a Sergeant recently assigned to an army bomb squad is put at odds with his squad mates due to his maverick way of handling his work.
Director: Kathryn Bigelow
Writer: Mark Boal
Stars: Jeremy Renner, Anthony Mackie, Brian Geraghty

Kathryn Bigelow is among my favorite directors. Her credits include: 2017 Detroit, 2012 Zero Dark Thirty, 2008 The Hurt Locker, 1995 Strange Days, & 1991 Point Break. Detroit and Zero Dark Thirty really set her apart for me. She’s a special director and you can trust in “Spring-loaded” film with a lot of suspense and bombs in it that she has calculated everything to make a point and to be enjoyed as a motion picture.

Like so many films, this one shows how messed up war is and how much is can wreck people mentally. We as armchair observers can sit back and contemplate the severity of that. I think it’s important we watch films that shed a like on what modern warfare is about. The ways we connect with other cultures should be the focus not the ways we are different. War wukk always be with us but a better perspective is available to us always, just around the bend. I gave this film an 8/10.