This is an exciting adventure film for all ages. It combines amazing visuals with a story about the quest of the Avatar. Though some may find the cartoon imitation more suited to teens and under, it has something for everyone: swashbuckling martial arts, a hero, creatures, a villain, and fireballs aplenty. 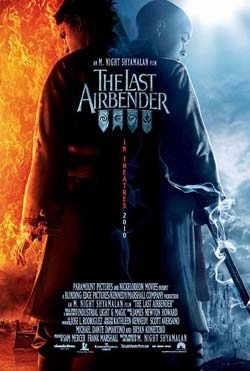 As I did for my last review, I watched a movie tonight in preparation for the podcast I’m doing with a new movie reviewing friend Darren Lucas. We’re set to discuss the movies of M. Night Shyalaman, this was another one I hadn’t seen yet.

It’s a story about a teen who has incredible “airbending” powers enabling him to defeat opponents almost effortlessly. I knew the basis of the character because my son watched this anime style cartoon when he was in elementary school.

It started out exciting. In some ways, I think M. Night tried too hard to make it look like the cartoon, it is live action. Nonetheless, it has a hateable villain that we are meant to somewhat have empathy for since he was burned by his father. It also has a pretty supporting actress. Her presence and acting reminded me of Hilary Swank in her old school Power Ranger character of the 1990’s.

There are some other great characters that do a good job supporting the Last Airbender in his struggle. Of course, there is almost credits-to-credits martial arts in a pseudo form. Throwing of fireballs is common.

I enjoyed the film, it was definitely an adventure. Another effect that some will find noteworthy is the cgi animal the Avatar rides. There are several creatures and they are done far more well than the creature in my last review of “After Earth.” M. Night definitely pulled together the right resources to make these effects work

My word to the wise: This is an amazing Action, Adventure, Family film. I usually don’t watch movies like this: anime, Naruto, the Avatar, etc. but I did love Speed Racer back in my younger breakfast-cereal-in-front-of-the-tv days. Still, I was glued to this one. What does it say about the work of M. Night Shyalaman? He can apply himself to multiple genres and create an entertaining film. After all, he has written screenplays for movies from the family film “Stuart Little” to the horror/suspense film “Devil.” For many other genres he has both written and directed the films. We see the child in him in “The Last Airbender.” It certainly brought out that childlike wonder in me. I recommend this one. It did lose a star with me because I would have liked to have seen it adapted more to the dramatic screen, relying less on trying to make it look like the carton.