There are formulas that work in movies. Walt Disney was always looking for the next hit. “The Love Bug” is a family film that carries its own weight off the race track! 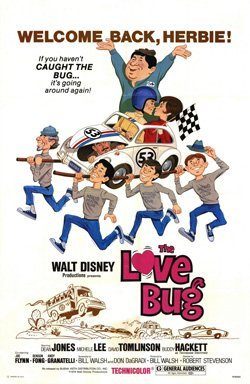 I remember the warm feeling I had seeing this in the theater around 1977. It is a 1969 release that played over and over for years in theaters, always selling plentiful tickets. Who can resist when Herbie honks his horn and saves the scene. The actors are top notch as well. It’s no wonder there were so many sequels. “Herbie Goes to Monte Carlo” is another one I enjoyed in my youth. The cliche “They don’t make them like they used to” comes to mind. I had fun watching this most recently at age 46: the same age of the movie!

2 Replies to “The Love Bug”