I chuckled when I read today’s prompt at the Daily Post. If you’re married, you’ll probably know why. It gave me a reason to write about a lovely person, which I never pass up a chance to do. It’s sort of like bragging.

Who was the first person you encountered today? Write about him or her. 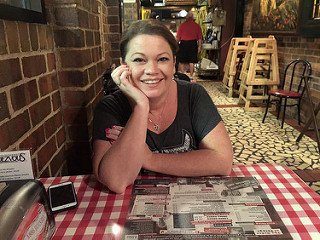 The first person I encountered this morning was my wife, of course. I don’t have a traveling job and she doesn’t work the wee hours of the morning as she once did. Allow me, the luckiest person, to tell you just a little bit about my wife since that’s what the prompt asked for. Sarah Darlene Youngs was born 8 years after me. She grew up in the High Desert town of Apple Valley California. Her dad was an auto mechanic who often worked two jobs to make ends meet. She graduated from Apple Valley high school and worked as a waitress up to the time that I met and married her in 2002. I call her the “High Desert Princess.” She had a far off dream of being a high school teacher and enrolled at the local community college. She had one cute-as-a-button son who I later adopted named Brandon. He was 4 when we met.

After working heinous early morning shifts and others at Carrows and Red Lobster for a many years, Sarah got serious about college. We had two baby girls in that time. They are now 8 and 10. Since then, Sarah has finished her AA, BA, MA, and is now finishing her license for MFT. She has fully completed all the requirements. She works as a therapist at the same high school she graduated from. We’re enjoying a 4 day weekend after an amazing Thanksgiving at my in-laws house. That’s a little prideful writing about the lady I woke up to this morning. The photo is one I took across the table of Sarah when we were recently in Memphis, Tennessee at “Rendezvous,” a world famous barbecue joint.

0 Replies to “The Luckiest Person”