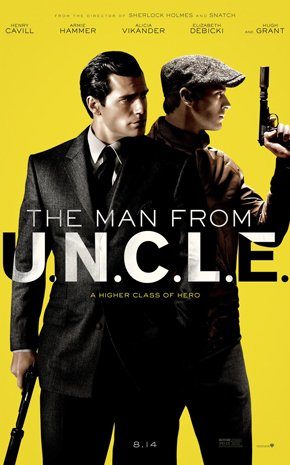 Title: The Man From U.N.C.L.E.
Genre: Comedy, Crime, Drama
MPAA Rating: R
Year: 2015
Director: Guy Ritchie, “Snatch,” “Rock N Rolla”
Top Billed Cast: Henry Cavill, “Man of Steel,” Armie Hammer, “The Social Network,” Alicia Vikander, “Ex Machina”
Brief Synopsis: A film adaptation of a late 1960’s television crime drama. Themes, soundtrack, and visuals are very similar to 007 and “Mission Impossible” films. The story that involves time/date appropriate and overused cold war tensions.
My Word to the Wise: Guy Ritchie does a good job with visuals. He must have some cool apps for editing. Much of the film is spliced up like my “PhotoGrid” app on my iPhone 6 plus. Story, not amazing. I do like Henry Cavill’s voice. When he speaks, you can’t help but wake up. There are some cool stunts as well.

Guy Ricthie can boast of being married to and divorced from Madonna. He can’t say he went to film school. In fact, he’s known for saying film school graduates make boring films that are “unwatchable.” I think Guy Ritchie should have gone to film school. He has a big mouth that his movies so far, for me, can’t back up. This film is shallow and not much more than an undergraduate’s best effort, given access to all the big boy director toys. Somehow this guy knows how to get in with the big dogs, unfortunately he can’t run with them. I’ll send him an application to Cal Arts. God knows he can afford the tuition. Having said that, it’s a nice presentation visually. It would be a good one to put on the HiFi surround sound on low at a cocktail party. Not much stayed with me.