Racists exist. We as a society learned this best through daytime talk shows all through the 90’s. I recall more than a few toothless pontificators. 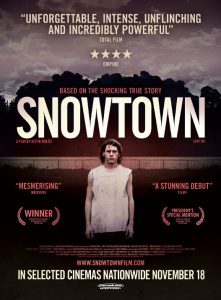 Those are the entertaining kind, the scariest ones operate covertly in families. And then there are those who are neither covert nor entertaining, those whom are pure evil. John is such a man. Though many will interpret this movie as macabre horror, it doesn’t attempt to be that. Instead it strives to be an endurance test in tense human relationships and murder. In the final analysis it’s a study about bigotry in poverty left unchallenged. The real John is serving 11 consecutive life sentences for torture and murder. Young men need role models. Without them, they are susceptible to the Johns out there.

This film was directed by Justin Kurzel, it was his directorial debut. The lead role of serial killer John Bunting is played by relative newcomer Daniel Henshall. Daniel’s performance in this film has already won him multiple awards. I add my praise to that, he does an excellent job at being scary and believable. The scariest part about him is that he could be the neighbor helping you take in your groceries.

This film is based on a true story of a serial killer. A summary of the film is as follows: Jamie looks up to his mother Elizabeth’s new boyfriend John. They live in an Australian form of welfare housing in an under-decorated environment. There are sweet family moments depicting a happy family. Jamie’s 2 younger siblings run around and play like any normal kids their age. What is not normal is the judgmental, bigotry that John espouses. Early on the family clings to his stability. In a world that seems to care so little, John is their stability. Most the movie is a study of Jamie and John’s relationship. Jamie learns to trust and respect John even up to the point of killing with him. More than a macabre horror tale, which it decidedly is, the film shows the environment in which a real serial killer survived and thrived.

The acting and sets are superb. I was on the edge of my seat the whole 2 hours. While there isn’t a ton of gratuitous violence, there is some truly hideous stuff here. It will not appeal to a wide audience because of this. The killer is not glorified but clearly the director seeks to show how a serial killer can grow and thrive in a disenfranchised, impoverished social strata. I liked the character development but would have preferred more tender moments between the characters. It was as if everyone was tortured 24/7. Does respect really grow out of that? It seemed to me Jamie would have gone to the police early on if his life were that miserable. There is nothing to like in John and what we can like in Jamie is neutralized early on when they start killing. If you watch the Snowtown Murders you will find it obtusely disturbing as I did. Well, at least I hope you will.

One Reply to “The Snowtown Murders”