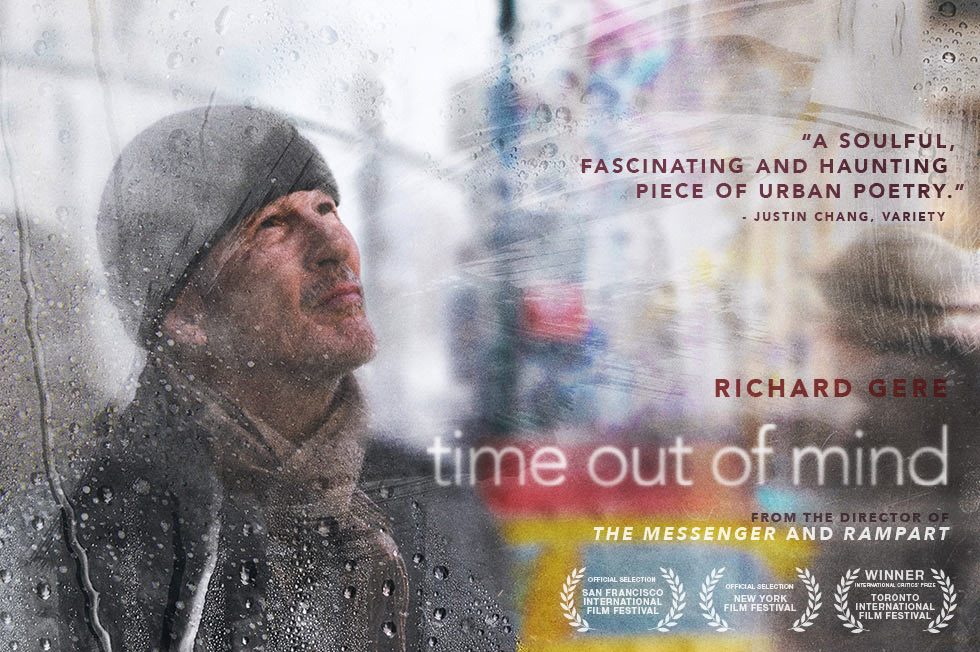 Title: Time Out of Mind
Genre: Drama
MPAA Rating: R
Year: 2014
Director: Oren Moverman. Known for The Messenger (2009), I’m Not There. (2007) and Love & Mercy (2014).
Top Billed Cast: Richard Gere, Ben Vereen, Jena Malone
Brief Synopsis: If you wake up on a park bench not knowing where you are or how you got there, it’s time to figure that shit out.
My Word to the Wise: It’s a little like watching paint dry. Plan to sit for a long time with nothing to read into or predict, and if you can handle that, you might get the brilliance that is definitely there.

What do I get for all this waiting? That was the question I asked about an hour into this film. That was when I learned this is more like a documentary/reality tv type of experience than a Hollywood plot with sub-plots etc. There might be something to read in when Ben Vereen sits down to play piano and doesn’t play a note out of fear of having lost his mind to aging. There might be something to when the asshole at the homeless shelter sleeping next to Richard Gere’s character suddenly disappears, his cot curtly folded with a satchel on top with sundries for the next dude. I don’t know and I don’t think people are talking about what they can KNOW from this film. It’s a country mile from Pretty Woman, know that going in. Unless you’re dating a granola chick, this one offers no cuddly moments. Did I mention Richard Gere is a really old looking MoFo?

I don’t want to guess the idea of this movie because it’s like breathing, once it starts, it plays before you and you watch … that’s it. The homeless issue in New York is right before you. Getting old is before you. It’s almost unfair how Gere can attain such a high level of bliss through Buddhism that he can wave this movie in our faces and say, “Look at the evil ean shit we do to each other.” It’s a brutal film without having to resort to anything brutal onscreen. I saw it alone and would recommend that’s how you should see it. It’s not an “art film” and it won’t do well as a Hollywood blockbuster. It’s the dark hallway we all try to avoid until one day we are forced inside. When we reach that lowly state in life, there is rarely any redemption. My final thought? A powerful film about homelessness and aging that requires a lot of patience on the viewer’s behalf but does have a worthy payoff.