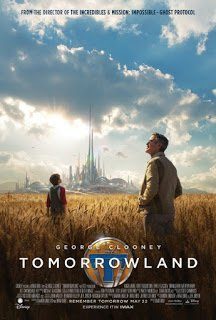 Disney has been writing new stories with Disneyland as a backstory for years now. The worst that comes to mind is the Haunted Mansion. Tomorrowland falls into the “backstory of Disneyland” category. The trouble here is that people don’t share a concept for Tomorrowland. Instead of pushing it aside and making a movie disconnected from the “land” at Disney, to the right at the end of Main Street, They’ve attempted to tell us all the backstory that never was. I think it’s that common insult to Disneyland fans that derails the bus to best picture. They’ve also had mixed success with remakes in the past 2 decades. Having said that, if you can get beyond their puny rationale for what the real life Tomorrowland is, there is a pretty great story here to be enjoyed. So far, the reviews I’ve seen have not been kind to this movie. I have a different take, it’s a pretty great movie. The lofty ideal of hope in movies springs eternal. One of the reasons I love movies is because they often make me feel hopeful.

Tomorrowland gives you a good feeling about the past, present and future. There’s also a personal charge to decide your own fate. These are just a few of the positive messages in the film. If you’re like most people, you’ve read the nasty reviews and seen the low ratings. Don’t pay them any mind. This is a movie for the future citizens of the world. They may have lost points by trying to tie it so closely to Disneyland. It’s slow at times and the characterization is not as good as say: Escape to Witch Mountain. Still, there is a fun “ride” here in the form of a movie. Because they tied it to Disneyland in title and theme, it lost points with me. Never tell a church going person what church is. At the same time, the legions of moviegoers with expired, yellowed Disney passes in their wallets are too strongly connected to the real land. This is one director’s vision and we are all directors. If you can set that aside and see it as its own movie, it’s pretty good. Not excellent but pretty darn good.