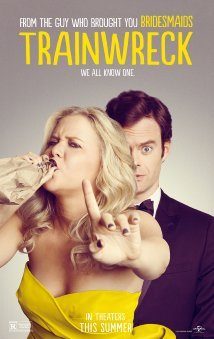 I confess I look at critic ratings prior to seeing movies, expecially ones that aren’t out yet. I saw Trainwreck garnered high 90 percents from the critics on Rotten Tomatoes which really surprised me so I was interested. The cover looks like Bridesmaids and the Hangover had a baby and that’s somewhat accurate. What I didn’t know going in was that the protagonist has starred in her own Comedy Central show for two years. In fact, she’s been on Ellen and spurred viral footage of her riffing and making Ellen snort she’s so funny. I think it would help for people to know she is an established comedy commodity with a distinctive vulgar and often understated style. Without that knowledge, one could make the mistake of thinking it’s just another sex and puke comedy dangled before primal eyes.

Maybe that alone will work for most viewers. We’ve been so inundated with gross films in the last 20 years for which audiences show their love through ticket sales. As for me, I think if I didn’t know of Miss Schumer’s notoriety and idiosyncratic style, I might has scoffed through most the movie. As is was, I enjoyed watching her brand of humor for a couple hours. Speaking of hours, there were some scenes about 3/4 of the way through when she and her boyfroend, Bill Hader, start fighting like a married couple where the film truly dragged for me. It’s for those scenes as well as unnecessary penetration scenes that didn’t add to the comedic lines for me. In other words, the writers didn’t have to stoop that low to relate with the audience. That a; having been said, I found this film a hoot to be sure. My wife and I were in tears during the sex scene with John Cena. He’s the perfect hunk to demonstrate what talking dirty is not.