I love the novels of Jack London where there’s sure to be snow, whiskey, white fanged husky dogs and other Alaskan treasures. Nature “bites” in this film where we have a couple trying to fight back their demons in this harsh place. Is it a romance? Well, lets examine that too. 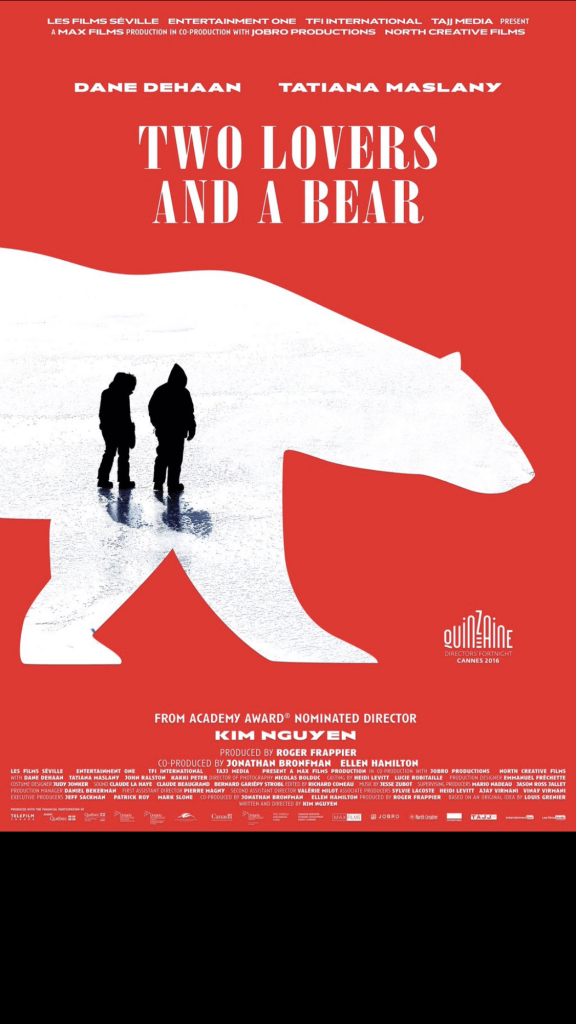 Enter Hemingway, Melville, London … you will like what’s being served at this table. We’ve heard of nature being our indifferent enemy but what to do when that enemy is our own nature. We have not yet begun that process in film and literature, but it’s here in this film … along with a few others through the years.

Set in a small town near the North Pole where roads lead to nowhere, the story follows Roman (DeHaan) and Lucy (Maslany), two burning souls who come together to make a leap for life and inner peace.
Director: Kim Nguyen
Writer: Kim Nguyen
Stars: Dane DeHaan, Tatiana Maslany, Gordon Pinsent
I almost always love the film when the director also wrote the film. In this case it is Kim Nguyen doing both artistic roles. My hat goes off to him, and I assume he wears a hat also because like me, he is shaved bald. (Gotta love the brother!). I don’t know much about him other than he is known for this and two other films and he is a Canadian: War Witch (2012), Two Lovers and a Bear (2016) and The Marsh (2002). I would put stock in him because this film is something quite different than we are used to seeing. Human v Nature/Human v Self. It’s a gritty psychological drama and God forbid IMDB plot keywords would let us toil in ignorance of these features:

Yes, Orphan Black star, Tatiana Maslany, bares her breasts. That’s the easy part of nature no one is too worried about.

All these facts plus the plot basically is two lovers at the North Pole in a barely functioning town. Why they are there is not explicitly mentioned, at least not as much as the breasts are displayed. 😉 There is something about an abusive father in her past and he … likes the drink and he likes the hard drink. Sometimes you gotta just go “right now.” Other times maybe your demons are better dealt with by a heater. This couple is fraught with demons and they decide it’s time to go into the snow, into the storm but not without the help of a very helpful? bear. Dane DeHaan seems to like him. BTW DeHaan is there and does a good job as such. Not much more is needed from the, I wonder if he even likes the White Stripes.

This is no family movie. It’s also not a sweet romance, unless you think of Moby Dick as romantic. Having said that, there is a lot to think about romance here, maybe how “not” to support a lover with baggage. For a gritty tale of love? turmoil and t*** on a table, I do recommend.