What can I say, this white trash is my people. They hunt wild turkeys, farm for worms, police areas that don’t ever need “policin.'” If you can get in the one, it’s downright pleasant and hypnotic to listen to. I may not speak with that Southern. drawl but I grew up hearing it from my ancestors like grandpas, -ma’s, aunts and uncles and the like. This is a set of them whom Errol Morris (The Thin Blue Line) arranged to interview in their retired habitat: Vernon, Florida. 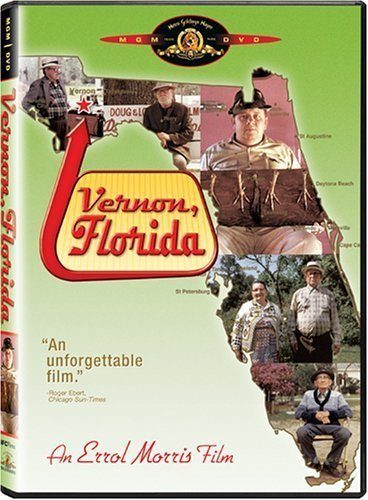 One of the most remarkable clips is the man and woman sharing about how they got a small bonus and went to the sand dunes to watch the sand “grow.” You couldn’t write stuff better than this. At one point she even goes back in the house to bring out sand in a mason jar to show off from her trip. This is a slice of retired white America in 1981 and it’s priceless if you can get into the zone and trip out on it. There is some wisdom in it too,

One example is the bearded man in glasses when he shares a photo he took that accidentally captured a star. He cryptically explains it happened as he was shooting clouds. He claims when you aim at something, you might hit it or you might not. I’d say that’s wisdom because it’s better to aim than to not right?

If you can get into the zone of listening to retired people bullshit, which I was able to today being on break from work and all, I highly recommend this documentary.

WAYS TO WATCH
At time of writing this, July 2017, it was streaming on Netflix

You can also watch now on Amazon Video: